Maine’s public health officials scrambled to respond to the threat of an epidemic. They were contending with a misinformation over the effectiveness of vaccinations, and xenophobic sentiment which blamed immigrants for the threat. The year was 1885, and the threat was coming from Canada.

In the spring of 1885, a smallpox epidemic had broken out in Montreal, then a city of around 200,000 people. Ironically, the disease came to the city from the United States, via a worker on the Grand Trunk Railway on the Montreal-Chicago line. Conductor George Longley had been diagnosed with smallpox at Montreal General Hospital but the facility refused to admit him, fearing the disease would spread to other patients. So Longley turned to the French hospital, the Hôtel-Dieu, took him in. From there, the disease, sometimes known as the “red death,” spread rapidly among the poorer French Canadian population of the city.

Despite its virulence, smallpox was preventable. A vaccine (the first vaccine to be discovered) had been developed by British scientist Edward Jenner in 1796. The invention of the smallpox vaccine had been a great advance in public health that saved countless lives.

But in Montreal in 1885, large numbers of French Canadian families had not been vaccinated. Eventually, 3,000 people, overwhelmingly French-Canadian, would die duding the city’s epidemic.

As word of the outbreak reached the American press, officials were worried. In states like Maine, large numbers of French Canadians were immigrating to work in the state’s industrial cities or crossing the border to work in the logging industry contemporary accounts describe new trainloads of immigrants arriving in Lewiston every day. It seemed quite possible that the disease would find its way into Maine.

Officials sprang into action. The State Board of Health had been newly created in 1885, and coordinating the response to smallpox became its first major task. Larger cities employed their own physicians and health boards to oversee efforts, while in rural areas, the state sought assistance from the US Marine Hospital. 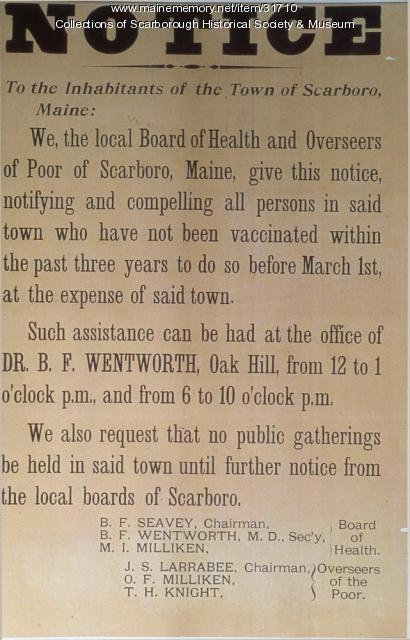 The primary initiative was a massive vaccination campaign, particularly in towns with sizable Franco-American populations:

In Bangor, the City Doctor visited all 69 schools in the city during October and September, vaccinating 1,180 children.

In Augusta, Dr Brickett went from house to house in the Sand Hill neighborhood, with the assistance of an interpreter, vaccinating 515 people at the expense of the city. He noted that he was “treated with great politeness” and that the houses were “in a neat and clean…and [good] general sanitary condition”

In Westbrook, the Board of Health offered free vaccinations to inhabitants over the age of two, citing the “presence of so large a number of Canadians in our midst” and the “humanitarian” and “commercial” consequences an outbreak would have.

These vaccinations were generally given at the city’s expense, and particularly targeted children, who were most vulnerable to the disease. 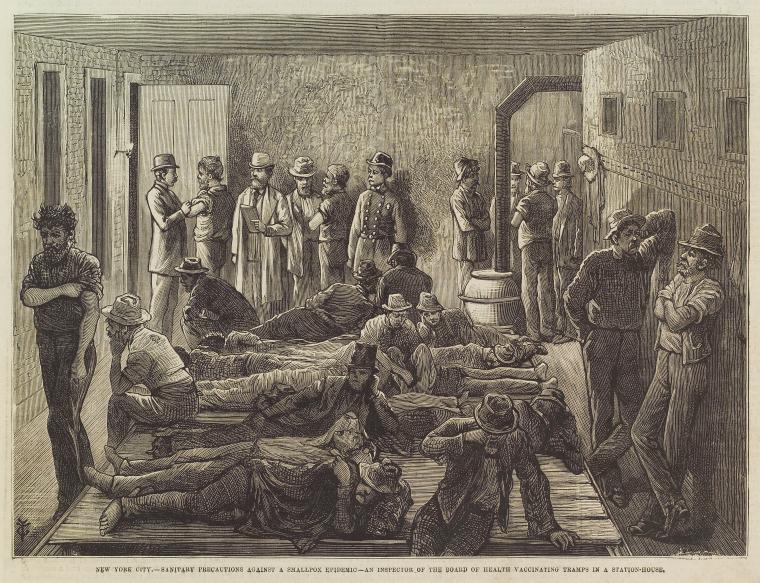 “Sanitary Precautions against a Smallpox Epidemic – An Inspector of the Board of Health Vaccinating Tramps in a Station House,” Leslie’s Illustrated Newspaper, April 19 ,1874. Image: New York Public Library

Maine authorities also targeted lumber camps which employed large numbers of French Canadian workers. The state set up an inspection station at Moose River, on the major overland route from Quebec into Maine. All travelers were required to be vaccinated unless they had recently had one. However, there were reports that some immigrants were “escap[ing] by passing in the night.”

The vaccination campaign seems to have been largely successful. Just a handful cases of smallpox were reported in Maine that year.

On the other hand, it’s possible that the public health scare was overblown. Le Messager of Lewiston complained in an October 14 editorial that the outbreak of smallpox had given the English language press in Canada the “the eagerly-sought-after occasion to spew its hateful bile against the French Canadian race which it resents.” The American press, they contended, was “no longer hide what they really think of our race, from whom they are perhaps already thinking of relinquishing their hospitality in this country.” They also accused the Maine press of repeating “hateful slander” without questioning the source.

The prejudice of the disease-carrying immigrant is a long one, and one that’s been repeated in our own times. Additionally, French Canadians had long been characterized as ignorant peasants held back by Catholic “superstition.” On September 30, the Portland Daily Press said that French Canadians were “paying dearly” for their “superstitious prejudice” in its coverage of the outbreak.

Another example comes from the Gardiner Home Journal of September 16, 1885, which wrote:

“There is some advantage in us not having cotton mills, with the accompanying French Canadian population: we are not liable to have the small pox imported so soon.”

There certainly was opposition to vaccination among Montreal’s French Canadians. Not only was a large portion of the population unvaccinated when the disease broke out in the Spring, but when the city authorities tried to mandate vaccination, a riot broke out, and a mob stormed city hall.

The report of the Maine State Board of Health for 1885 cited a “strange fatality of ignorance of race” among Montreal’s French Canadians, but also said that the “superstitious error” was due largely to the “demagogism of charlatans” – advocates who argued that vaccination itself was dangerous. The board scathingly called the death of the 3,164 people in Montreal – mostly children – an “experiment on a gigantic scale” by “the anti-vaccinations.”

However, accounts of the trouble in Montreal (then and now) also often leave out important historical context. Anglo-French relations in Canada were particularly tense in the summer and fall of 1885. The Anglo authorities had arrested Franco-Métis resistance leader Louis Riel in May, and would execute him in November, prompting widespread protests. The French Canadians of Montreal were in no mood to have government mandated vaccination imposed on them. 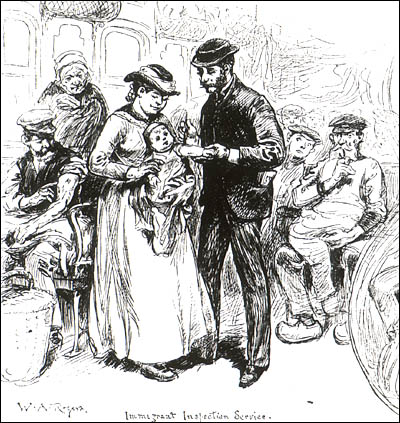 The outbreak was also largely localized to Montreal, as Dr Louis Martel of Lewiston explained. Originally of St-Hyacinthe, QC, Dr Martel had practiced in Montreal before coming to Lewiston. Martel gave an interview to the Lewiston Gazette which was reprinted in Le Messager (where Martel was one of the editors). In addition to a misinformation campaign spread by proponents of homeopathic medicine, Montreal’s French Canadians had some reasons to distrust vaccines:

“I witnessed the smallpox epidemic which hit Montreal in 1872. There was some opposition to vaccination, for two reasons. Firstly, because two reputable doctors, one of whom was a university professor, were themselves opposed; also because the virus used was bad; so bad that in some cases arms had to be amputated.”

Doctor Martel also pointed to another reason that smallpox didn’t take hold in Maine. Because very few of Maine’s Francos came from Montreal, the state’s exposure to the disease was limited. In fact, the efforts at vaccination were somewhat duplicative:

“During the year I was City Physician in St-Hyacinthe, it was my duty to vaccinate all children over six months, by going from house to house. I don’t remember any objections or discontent. I hesitate to believe that I would be received with anything other than open arms in presenting myself to Lewiston homes with the same mission. I vaccinated more than 2,000 French Canadians in this city, and of that number, I don’t remember a single adult who had not been vaccinated at least once in their life.”

The 1885 smallpox scare is both similar and different to our current conversation about vaccinations. Then, as now, immigrants faced prejudice and were unfairly maligned as vectors of disease. Then, as now, public health was threatened by a mistrust of vaccinations, fueled by a misinformation campaign. The public health response in 1885 was quite different to today’s. While the question of mandatory vaccination for school children has divided Mainers, there was a consensus among the politicians of 1885 not only that vaccination was a public good, but that it was worth spending taxpayers’ money to improve the health of immigrants – quite the opposite of some of the hostile rhetoric we’ve seen today.