There’s been a lot of speculation that 2018 will be the “year of the woman” in US politics, with a record number of women on the ballot, and turnout expected to be high among women. Tuesday’s election results will tell us how true that is, but nearly a century earlier, the women’s vote was certainly a game changer. And in Maine, the question on everyone’s mind was “what will the French women do?”

In 1920, the United States granted women the right to vote nationwide for the first time, via the 19th amendment to the constitution. While other states had already enfranchised women (beginning with the Wyoming Territory in 1869), the 1920 elections in Maine were the first to be held after the ratification of the federal amendment, and therefore garnered national attention. Until 1957, Maine held elections for state offices and for us senators and representatives in September. For this reason, and because Maine was a bellwether state for many years, Maine’s state races were pored over for clues to the nationwide Presidential poll in November. 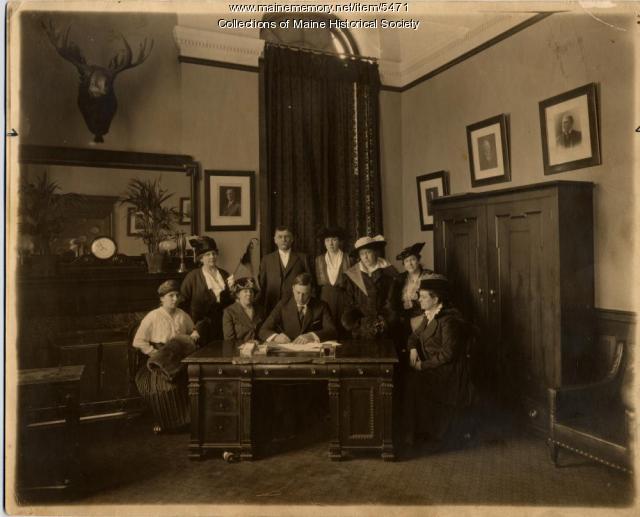 Governor Carl Milliken (center) signing the legislative resolution which first proposed women’s suffrage in 1917. The suffrage amendment was defeated in that September’s vote, and reinstated in 1920. Image: Maine Historical Society

In 1920, Maine’s state and congressional elections were held Monday September 13. This was just weeks after the 19th amendment was ratified on August 20th, when Tennessee became the 36th state to approve it. Governor Carl Milliken called the Maine legislature into special session to pass legislation to explicitly allow women to vote in the imminent election.

The New York Times published a substantial feature story on September 12, on the eve of the Maine vote, offering a glimpse into the scramble to register and turn out women voters:

“Something that is worrying the politicians even more than the French or the Irish vote is the woman vote…Just what women will decide to do with their ballots is keeping the politicians in both quarters worried…Each [party] is afraid that the other will steal a march, so both are going out for the women.”

Franco-American women were just as critical to this effort as any potential new voters. The Franco vote in Maine was generally Democratic in this period, partly because Maine’s Democrats were concentrated in the same mill towns as Franco Americans. The exception were Acadian voters in Aroostook County who trended Republican, like their rural neighbors. 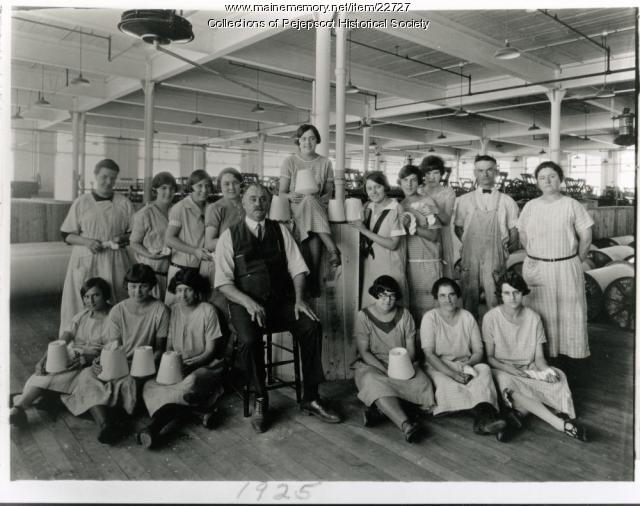 The potential of Franco Americans had made them a focus of party operatives for decades. Initially, both Republicans and Democrats made efforts to woo “the French vote.” However, Republicans struggled to get votes from Franco Americans in most cities and large towns for a number of reasons. Republicans favored prohibition, which was not a popular policy among Francos. Longtime Maine Republican leader James G Blaine had pushed for laws outlawing public funding of parochial schools. Most strikingly, the Maine Republican Party was firmly anti-immigrant by 1920. The party had passed a series of laws restricting the franchise and other rights of immigrants.

In the run up to the 1920 poll, Democrats were focused on registering Franco women:

Meanwhile Republicans were using “the French vote” to motivate turnout among Yankee women:

“To counteract the great influx of Democratic votes of the French women, the Republican Party is fine combing the county, bringing out any Yankee farmer’s wife they can find…The argument is put up to all of them that there is great danger of the French getting control of politics in the state by virtue of the large French mill workers’ votes”

Even the Times, a pro-Democrat paper, was not immune from inflammatory language. In describing the effect of the Franco vote in Brunswick, the times described the immigration of French Canadians to the small college town as “an invasion.” 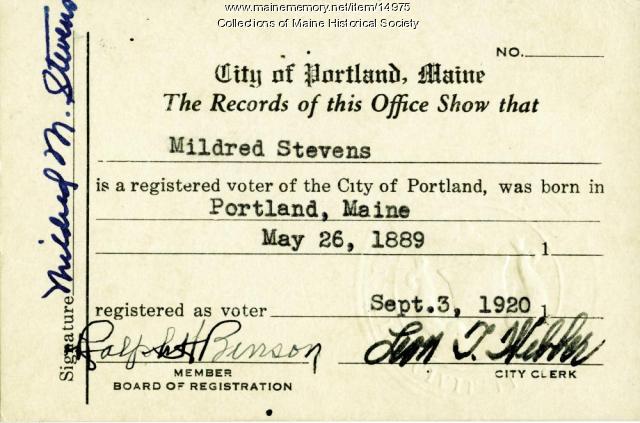 The act of registering Franco women also faced an additional obstacle. One of the Republican efforts to reduce the power of the “Franco Vote” had been the introduction of a literacy test in 1892. When registering to vote, Mainers had to be able to read a section of the US Constitution in English. As the Times noted, this provision could be potentially harmful for Franco women, given that historically they were less likely to complete formal schooling. But the literacy test was also administered with varying degrees of vigor. In Lewiston, the requirement was little more than a formality:

“As they enter the long corridor leading down to the registration room, they are met by women speaking their own language, who greet them with “Voulez-vous registrer? Entrez ici, s’il vous plait”…They come, by twos and threes and fives and tens. They have official interpreters to ask them the necessary questions, and they answer in their own language.
When it comes to reading a few lines of the Constitution, they pass muster by virtue of the fact that a friendly eye is on them and a friendly ears hears their mistakes.”

However, in Brunswick, where the town administrators were Republicans less inclined to relax the rules, the literacy test hampered the registration of new voters.

“In Brunswick, as in Portland, the registration of French women has been exceedingly small. The women are timid, shy and inarticulate away from their own kind. A good many of them cannot speak English. They can read it a little, and probably would pass muster once they made an appearance at the registration desk, but fear of being publicly abashed keeps them home.”

At least in Lewiston, Franco women appeared just as eager to vote as men. Le Messager,the city’s French language newspaper, reported that of the 3,800 new women registered to vote in the ten day registration window, 1,500 were Franco-Americans.

However, when it came to polling day, women across Maine turned out at lower rates than men. Le Messager expressed disappointment that just one in three registered women turned out. It’s not clear if this was just a result of the rushed nature of the registration and organizing period, ,of apathy, or if voter suppression played a role. “Women Out in Force,” scene at a polling station in New York City, ca 1922. Image: Library of Congress

Mainers made a big deal of welcoming women to the polls. Some polling places made a special effort to clean before the “gentle sex” stepped foot in the building for the first time. In one location, flowers were added to make the atmosphere more feminine. The polling place in Lewiston’s sixth ward was called out by the Lewiston Evening Journal as being “rather unpleasant and distasteful.” Their rival paper, the Sun, denied reports that the Lisbon Street garage being used as the polling station was full of men swearing, smoking, and chewing tobacco. Election officials allegedly had to open a separate line for the women waiting to vote.

Despite the speculation about a “women’s vote” before the election, there doesn’t appear to have been a great change in the preferences of the electorate. The Times noted that nearly every Maine woman they interviewed planned on voting the way their family had always voted.

Any surge in Franco women voters did not apparently benefit Maine’s Democrats. Republican Parkhurst won election as governor by a landslide, netting around 65% of the vote, and the greatest number of votes in Maine’s hundred-year history. Republicans swept the state senate, winning every seat. In the state House, a mere handful of the representatives were Democrats. Only three towns had a majority of votes for the Democratic gubernatorial candidate – the Franco strongholds of Biddeford, Lewiston, and Waterville.

The experience of Maine’s Franco-American women stands in stark contrast to women in Quebec and France. While Québécois women could vote in Canadian federal elections from 1918, they did not get to vote in provincial elections until 1940. Likewise in France, the franchise was not extended to women until 1945.

It remains to be seen what impact women will have on 2018’s results, but with a campaign dominated by fears about immigration, and efforts to court the women’s vote, the echoes of 1920 are already clear.