On April 29 1892, Solomon Robitscheck wrote to Lewiston’s Le Messager objecting to the newspaper’s characterization of the city’s small population of Jewish peddlers. Two weeks earlier, Le Messager had published an editorial reprimanding Franco Americans who purchased items from the peddlers. Le Msssager’s argument was primarily economic – Franco Americans should patronize Franco owned stores instead – but the editors paired their critique with anti Semitic stereotypes and false accusations. The editorial appeared alongside the re-publication of a piece entitled Le Juif Errant (the Wandering Jew) which further reinforced the prejudices which had made Jews a marginalized and persecuted community for centuries.

The staff at Le Messager might have been surprised to receive a rebuttal, in perfect French, to their accusations. One of the very peddlers they had sneered at penned a vigorous defense of his community. Solomon Robitscheck had been born in Bohemia (today’s Czech Republic) in 1845. He coming to the United States in 1868, arriving first in New York City. By 1876, however, he was a resident of Portland, where he filed his intention to become an American citizen  under the name “Charles S. Robicheck” (he was naturalized in 1887). In 1891, he is listed in a Westbrook City Directory as a “travelling salesman.”

As Robitscheck wrote to Le Messager, he was one of the 15 to 20 itinerant peddlers in the Lewiston-Auburn area. Far from stealing business from Franco-American businessmen, Robitscheck pointed out, the local peddlers were eking out a living in poverty, as best they could:

In this city, there are about 15 or 20 Jewish peddlers who are forced to follow this way of making a living because their unlucky religion forbids them from working Saturdays. They wear their store on their backs – an extremely hard undertaking – because they do not have the thousands of dollars of merchandise needed to fill a store. They are almost all paupers, earning only a living for themselves and their families, often not even enough for that, because there are some who are indebted for their merchandise; others have families in Europe and are not able bring them over. They pay a big tax, $20 to Lewiston or $50 to the state of Maine, a very unfair tax. Many have already been forced out because they did not have the twenty dollars necessary to purchase their license. There may be two or three who, through hard work, managed to save a few dollars; the others are poor and it is not right to attack them. The sum of all their sales do not equal those of a single Main Street merchant and no one has a reason to envy them.

What’s more, wrote Robitscheck, the Jewish peddlers got on well with Franco-Americans. Franco families were “smart” to buy from the roving peddlers, saving them the time of going downtown for their shopping. Some Francos preferred to support the poor peddlers than the wealthy merchants. And the Jews returned the appreciation, finding Francos to be good customers. Robitscheck pointed out that they even extended credit to the families who couldn’t pay cash for their purchases.

This stood in sharp contrast to Le Messager’s characterization of the Jewish peddlers, who were portrayed as miserly and deceptive, resorting to lies in order to sell their wares. The editors even accused the peddlers of violence against Franco women:

Other times, [the peddler] will resort to violence if the housewife is alone, and if she shows a little fear.  In this case, it is best to take the poker and hit these penny-pinchers as you would hit a dog which has soiled the carpet.  And don’t worry that the peddler will avenge himself; he will be content to get out as fast as he can, with his bag, and you’ll be free of him for a long while.

Rather than responding directly to these slurs directly, Robitscheck simply noted that Le Messager’s characterization was “unfair and not worthy of a Franco-American newspaper.” He appealed to the Franco community’s sense of Christian duty, recalling “Jesus Christ, the Jew who died for them and for you,” and their common stays as immigrants “This country is big enough and rich enough for everyone.”

These pleas fell on deaf ears. Even as it published his letter, Le Messager piled more criticism onto Robitscheck and his fellow Jewish peddlers. The claims of poverty were just an act, wrote the editorial staff, and the appeal to Christian values was just as hollow. They remained staunchly unsympathetic of the peddlers:

Twenty dollars in taxes per year! They find it exorbitant. In our opinion this is excessively little; if they find that so high they can leave their bags there or rather their catalognes and go to work like we all do, instead of bothering us at all hours, especially on Thursdays, pay day in our mills.

For good measure, the Messager then repeated a set of “jokes” about peddlers. In one, a Jewish peddler lies about having consumption to make a sale; in the others, the peddler’s habit of haggling over prices is given as proof that they regularly overcharged Franco-Americans.

Such accusations against Jews were hardly unusual in 1892, and remain far too common today. Nonetheless, the Jews of Lewiston-Auburn, like others in Maine and across the United States, thrived in the face of such antisemitism. By 1902, Auburn had its first synagogue, Beth Abraham. In Maine, the Jewish population has grown from 500 in 1870 to up to 30,000 today. 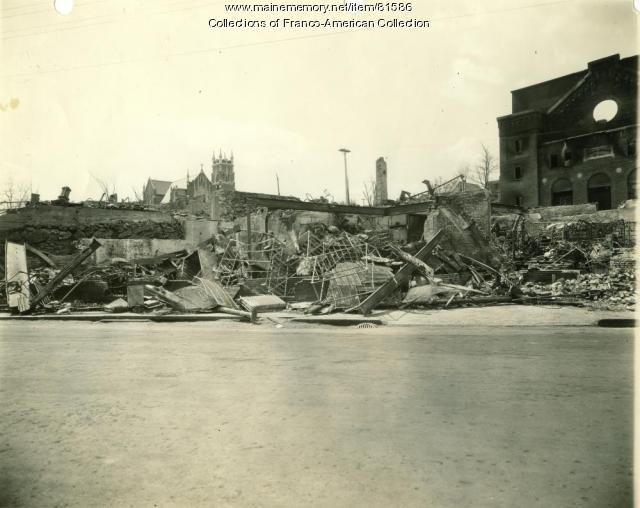 Ruins of the Temple Beth Abraham (at right) in Auburn, after the Great Auburn Fire of May 15, 1933. Image: University of Southern Maine, Franco-American Collection / Maine Memory Network

Solomon Robitscheck eventually left Lewiston for Lowell, Massachusetts. By the 1910 census, he was living in that city’s Little Canada neighborhood, still working as a peddler within the Franco-American community.

The exchange in the Messager between Robitscheck and the papers editors reminds us of the obstacles faced by Maine’s Jewish community but also of their their ability to persist in the face of adversity. It’s also a reminder that America’s minority communities have sometimes been divided against each other instead of supporting each other through hard times.