In the late 19th century, progressives and other reform-minded Americans pushed the benefits of the great outdoors to children in the nation’s cities. The impulse to bring city kids to nature led to the creation of America’s first summer camps. Maine soon became a popular destination for children from cities like Boston and New York. By the 1930s, the Dominican Fathers of Lewiston decided that the Franco-American children of Lewiston, then Maine’s industrial center, would also benefit from a summer camp.

The Dominicans, who ran the Parish of Saints Peter and Paul in Lewiston, purchased 140 acres of land in Leeds, 20 miles from Lewiston, for their new camp. They named it Camp Tekakwitha, after Saint Katerei Tekakwitha, a Algonquin who was captured by the Mohawks and who converted to Catholicism by French Jesuits as a young woman. Though she was not canonized until 2012, Tekakwitha was long revered in French Canada as a patron of the environment and Native Americans. The choice of name signaled the new camp’s connection with the Dominicans’ French heritage and Catholic faith, as well as fitting with the widespread tradition of naming summer camps for Native American figures and places.

In establishing a new Franco-American camp, the Dominicans were both part of the wider movement for summer camps, and distinctive. Like other camp founders, they believed in the value of the “great outdoors” for children’s education and character-building. They saw the need for this among Lewiston’s Franco-American children, many of whom were still living in poverty in the crowded tenements of the city’s Little Canada.

In the depths of the Great Depression, the families of textile workers would have been especially hard-pressed to pay for outings to the countryside, let alone camp. The Dominicans’ stated goal was to “give all children the advantages of camp life at the lowest possible price.” 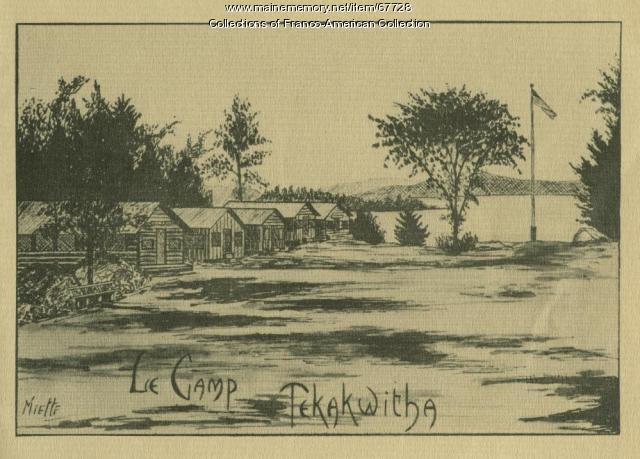 More than this, however, the opening of Camp Tekakwitha in 1939 continued the Dominicans’ long-standing mission of educating Lewiston’s Franco-American children. There were other summer camps available, some of which even specialized in helping needy children. But these were all English-language camps. Franco-American children might not have felt welcome there. And if they did, they might be led to adopt English customs and traditions, straying from the French heritage of their community. Even more dangerous (from the Dominicans’ perspective) some of these camps were run by Protestant churches and their affiliated organizations. The children’s very souls could be at risk.

Accordingly, the curriculum at Camp Tekakwitha, like the parochial schools, blended American and French traditions with religious instruction. A typical schedule included:

Camp wouldn’t be camp without outdoor activities, and the boys and girls at Camp Tekakwitha took part in volleyball, basketball, baseball, and swimming. Swimming and other waterborne activities were especially practical for the Lewiston children. Drownings in the Androscoggin River were tragically common in this era. Franco-Americans, who lived closest to the river, were especially susceptible.

In 1952, Camp Tekakwitha was joined by Camp Don Bosco, which was owned and operated by the Sisters of Charity of Lewiston (also known as the Grey Nuns). This camp was named for Saint Giovanni Bosco, a 19th-century Italian priest who was known for his mission to educate poor children. A number of “Don Bosco” camps were established throughout the United States and Canada.

The Sisters of Charity operated the Healy Asylum, a home for orphaned and destitute boys. They purchased a farm in Fayette, Maine, to serve as a facility for the Healy Boys. The barn served as a dormitory for the campers, while the nuns lived in the former farmhouse. Like the residents of Camp Tekakwitha, those at Camp Don Bosco enjoyed swimming, hiking, fishing and boating, as well as mass and religious instruction under the watchful eyes of the sisters and a Dominican priest.

At some point, perhaps even by the time Camp Don Bosco opened, Camp Tekakwitha had shifted its focus to primarily serve children from Québec. It’s unclear what prompted this changed, but Don Bosco, not Tekakwitha, became the main camp to serve Lewiston’s Franco-American children. Camp Don Bosco soon opened itself up to all children, not just the Healy Boys.

Ironically, for the Québecois children at Camp Tekakwitha, an institution originally designed to preserve Franco culture in the United States helped give generations of French Canadian children a taste of Americana.

Camp Don Bosco closed in 1969, but Camp Tekakwitha continues to operates as a private business, having been sold by the Dominican Fathers in 1980. It is the only Francophone summer camp in the United States.