A necessary reform to ensure the integrity of the vote, according to proponents. Confusing, un-American, and a waste of taxpayers’ money, according to opponents. These arguments played out in the Maine legislature in 1891, but have echoes of today’s debate over ranked-choice voting. A century and a quarter ago, they were arguing the merits of what we now consider a staple of our democracy – the secret ballot.

“The Polling Place” by William Hogarth, 1754. The painting shows the bawdiness that accompanied many elections before the introduction of the secret ballot. Image: Wikimedia Commons

Before the adoption of the secret ballot in 1891, Mainers voted in a couple of different ways. Town meetings were usually conducted in the “viva voce” style, essentially a show of hands. Some towns still use this method. In electing state and federal officials, Maine did vote by ballot (some Midwestern states even used viva voce voting for these elections).   However, the process was far from secret.

Voters had to bring their own ballot papers to be cast. Typically, political candidates and parties printed their own ballots and handed them out to voters in advance or at the polling place. Not only was voting a very public act, where everyone could potentially see who you were voting for, the system also all but guaranteed straight ticket voting, as parties would print ballots containing the whole Republican or Democratic ticket. Maine had been an early state to mandate that ballots were printed on white paper only. Before this, parties had chosen their own colors, making it even more obvious who you were voting for.

Having ballot papers written out by individuals or printed by parties and their associated newspaper presented other problems. In the heavily contested election of 1880, in which Alonzo Garcelon emerged the eventual winner, there were accusations that some votes were unfairly tossed out because voters had misspelled his name. Another common accusation was that of “ballot stuffing,” in which a voter could sneak multiple ballot papers into the ballot box as they cast their vote.

The lack of regulations around the voting process and restrictions at polling places opened elections up to bigger problems. It was easy to either bribe someone to vote the way you wanted, or intimidate them into doing so. Employers could hand out ballots for their preferred candidate to their employees, for example. And because the polling places were full of party officials and others, it was easy to check whether the bribe or threat had been effective.

Le Messager, Lewiston’s French-language newspaper, reported several examples of intimidation of French Canadian factory workers in the years running up to the vote on reform. According to the paper, during the 1888 election, foremen in one of Lewiston’s textile mills warned workers that “if they voted for the Democratic ticket, they wouldn’t be able to earn enough to provide their children even one meal a day.”[1] Some of those very children, working alongside their parents, came home in tears after hearing these threats.

Reformers argued that the secret ballot system would make elections cleaner and fairer, and break the power of party bosses. The system that was most commonly promoted was known as the Australian Ballot, because it was first adopted in that county. Critics derisively called it the “Kangaroo Ballot.” In the United States, Massachusetts was the first state to adopt the Australian Ballot, and its model was the one eventually adopted by Maine. The US Constitution leaves most details of elections and methods of voting to the states, so the secret ballot was introduced piecemeal into different states throughout the 19th century.

The provisions that were adopted in Maine in 1891 are familiar to us today. For the first time, the state would print official ballots for voters to cast. These would only be handed out in polling places, which would be restricted areas, limited to certain people and activities. Voters would fill out their papers in curtained-off booths, the design of which is essentially unchanged today.

Today, we take this system of voting for granted. But in 1891, the debate over the Australian ballot in Maine was fierce. The reform was heavily supported by Democrats, whose urban and immigrant voters, they thought, were more open to intimidation at the polls. Their voters, the factory workers, were also dependent on factory owners (largely Republican) for their livelihoods. Democrats were also a clear minority in Maine at the time and advocates for reform argued that the status quo benefited the Republican establishment which comprised most of the town clerks, election wardens and other election officials. The introduction of the secret ballot was seen by Democrats as a way of addressing the political imbalance. As Le Messager wrote, “Everyone will be able to vote according to their conscience without fear of their bosses’ vengeance”[2]

Republicans were split on the issue. Many of their constituents also saw the need for reform, and up to 10,000 Mainers signed petitions in favor of reform. Governor Burleigh promoted the Australian ballot in his 1891 State of the State address. Newspapers like the Kennebec Journal and Lewiston Journal we’re generally supportive. But some top party officials were resistant to the idea. Some saw it as a Democratic scheme to benefit only one party. Some said there was nothing wrong with the current system, “a law that to-day gives us as pure a ballot as any state in the Union.”[3] They scoffed at the need for changes to the current system, and portrayed the idea of voting in secret as cowardly and shameful.

Better carry an open honest ballot that anyone can see than a mutilated, mixed, “good Lord and good Devil” ballot under the cover of complete secrecy and hypocrisy[4]

They pointed to Massachusetts, where in some towns, the adoption of the secret ballot had increased the vote against prohibition. Proof positive that the Australian ballot only encouraged the worst elements in society.[5] 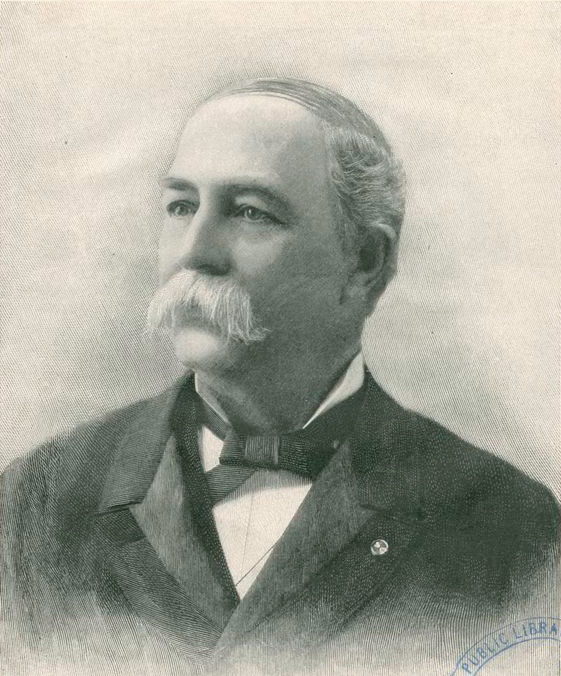 The most vocal opponent of change was Republican Congressman Charles Boutelle, who published the Bangor Daily Whig and Courier. Boutelle used his platform to argue strongly against the “Kangaroo Ballot” in Maine, even the denouncing other Republican papers, which supported reform. Boutelle was sometimes frank in his opposition to what he dubbed a “new fad.” In one editorial he wrote

In Massachusetts, they enjoy the sweet privilege of voting in a dark closet, but they have a Democratic Governor and a Democratic Congressional Delegation[6]

The New York Times excoriated Boutelle, as well as Congressman Thomas Bracket Reed (then Speaker of the US House) as just the kind of self-interested establishment figures who opposed reform for their own benefit. It also called out Republican state legislators who initially sank chances for reform in the state House in 1891:

Intimidation, the party lash, and the most disgraceful dickering were resorted to by the Republican leaders, and they all but accomplished their purpose.[7]

The effort to overhaul Maine’s voting system was a close-run thing in 1891. Though several Australian ballot bills were proposed in the 65th legislature, the judiciary committee initially recommended against passage, and suggested only implementing the new system in towns and cities with more than 2,000 voters. Democrats rejected this compromise, probably because these towns were largely Democratic already. Although the bill initially failed in the house, it won enough Republican support to pass the Senate and public pressure forced enough House Republicans to support the measure on a second vote.

The contest wasn’t over, however. The focus soon turned to implementation of the law. For the first time, the Secretary of State would be responsible for designing and printing ballots. When the sample ballot was released in early 1892 for that year’s elections, some Democrats cried foul. The new ballots placed Republican candidates in the first column, on the left-hand side. Voters who wished to vote Democrat had to be careful to check the box to the right of their candidate’s name, not the one to the left, which would be a vote for the Republican candidate

The New York Times denounced the new design as “unfair” and part of the Republicans’ “old tricks:”

The form of the ballot seems calculated to deceive and mislead even the fairly intelligent voters…This is not the only feature of the plan. The paper on which the ballot is printed is a flimsy sheet, almost tissue, through which a voter’s cross can be seen from either side of the ballot. Not only this, but the folding of the ballot is done (and there is but one way to do it) so as to bring the cross column on the face of the ballot, and when there is but one thickness of paper, this would enable a “ward heeler” or any outsider to see plainly how every man has voted, as he puts his ballot in the box.[8]

As election day approached, there were fears on both sides. Would voters be confused, leading to low turnout, or a high number of spoiled ballots? Supporters like the Times feared that Democrats would be disenfranchised by the ballot design. Le Messager took pains to explain the new method to its readers:

Read and re-read these instructions carefully, and you won’t make a mistake. On voting day, all you have to do is make a cross, and put the ballot in a box at the poll.[9]

Republicans, by contrast, worried that because “Republicans as a rule are business men” that they would not “give the time necessary to vote under this complicated system.”[10]

In the event, voting seems to have gone smoothly. There were some minor complaints. Some counts were contested and there was still some grousing. The Lewiston Journal joked that the only person to run afoul of the new rules was an Oakland man who, when his ballot was challenged, was so frustrated that he tore it up, in violation of the law.[11]

It’s hard to know what effect the change had. Initially on Election Day, the Whig fretted that Republican turnout was indeed down, and cited some anecdotes of ballots tossed out for errors.[12] Yet by the Thursday after the Monday election, it was clear that the total number of both Democratic and Republican votes was up compared to 1890 (at the time, Maine elected its governors every two years and held Presidential elections separately in November, so year was an “off year”). The Whig crowed that “the Democrats have been whipped severely all along the line.”[13] However, Democrats did cut the Republican majority for governor almost in half. In Lewiston, the city elected its first Democratic mayor in many years, Daniel McGillicuddy, by a razor thin margin of 78 votes. As Le Messager remarked, “this time they cannot accuse us of stuffing the ballot box.” In a jab at Democrat Nelson Dingley, they noted that his “money and newspaper [he owned the Lewiston Journal] couldn’t help him” this time.[14]

Ironically, as Mainers were using the new system for the first time, they were also voting to restrict access to the vote. On the newly printed state ballots was a constitutional amendment restricting suffrage to English speakers only.

The battle for the secret ballot shows us that democracy is always being refined and improved. Even reforms that we take for granted today – the right not to be harassed as you cast your vote and the privacy of the voting booth – were once controversial and contested.  One day, Mainers may look back at the fight for ranked choice voting in the same light