2018 is in danger of becoming the year of the white supremacy in Maine. Multiple elected officials have been outed as racists in recent weeks, from the town manager of Jackman to a school board members in Oxford Hills and Minot. Meanwhile, legislation in the statehouse has been called out as discriminatory by immigrants and advocacy organizations. One legislator has partnered with an anti-Islamic hate group; another has called immigrant assistance programs part of a “war on whites.” Most recently, the mayor of Waterville, who has a long history of aggressive anti immigrant remarks, is facing a recall effort.

It’s tempting to see this as turmoil caused by the relatively new arrival of refugees and migrants of African origin in Maine. But anti-immigrant sentiment has much deeper roots in the Pine Tree State, much of it directed against Franco-Americans.

French-Canadian immigration to Maine began as early as the late 1830’s, and picked up pace after the Civil War at the height of Maine’s industrial boom. This was a time of large scale immigration to the United States at large, and French Canadians in Maine faced many of the same prejudices as immigrants to other parts of the country. Key to understanding the discrimination they faced is understanding how they were viewed by American society at the time. In particular, French Canadians were seen as different for their religion (Catholicism) and their “race.” Anti Catholic sentiment was very strong in the US at the time. Catholics were viewed as having a loyalty to the Pope which was incompatible with American Citizenship. Some even thought Catholics were naturally servile and unfit to act as citizens in a Republic. This view stretches across US history, from Alexander Hamilton to the opponents of John F Kennedy.

The notion of French Canadians as being racially different to Americans of British descent seems strange to us today. We classify both groups as “white.” But 19th century Americans classified race differently. “White” was a much narrower category; largely restricted to people of Northern European ancestry – especially England, Scotland, Germany and Scandinavia. Early descriptions of French Canadian arrivals in Maine focus on their appearance, often describing them as “dark.” Even as late as 1911, the “Dillingham Commission” of the US Congress compiled a “dictionary of races” which described “the French race” as a mixture of “broad-headed Alpine brunettes,” “tall, long-headed Teutonic…blonds,” and “long headed brunettes or Mediterranean types.”

Through this lens, the experiences of French Canadians in the 19th century are not so different from those of today’s New Mainers, who are similarly targeted for their race and, in the case of Muslim immigrants, for their religion.

In Waterville, the destination for many of Maine’s first French-Canadian immigrants, some residents were quick to point out these differences. In 1862, the superintendent of the local baptist Sunday school called French Canadians “the Greeks at our doors,” a reference to the Trojan War, where the Greeks tricked the Trojans into opening their gates, before they slaughtered the city’s inhabitants. The clear implication was that Waterville’s growing Franco-American population was a threat. Mr Chase was nonetheless concerned for the souls of the newcomers, especially the children. He urged their conversion of the new arrivals, even if they were “nobody but French.” 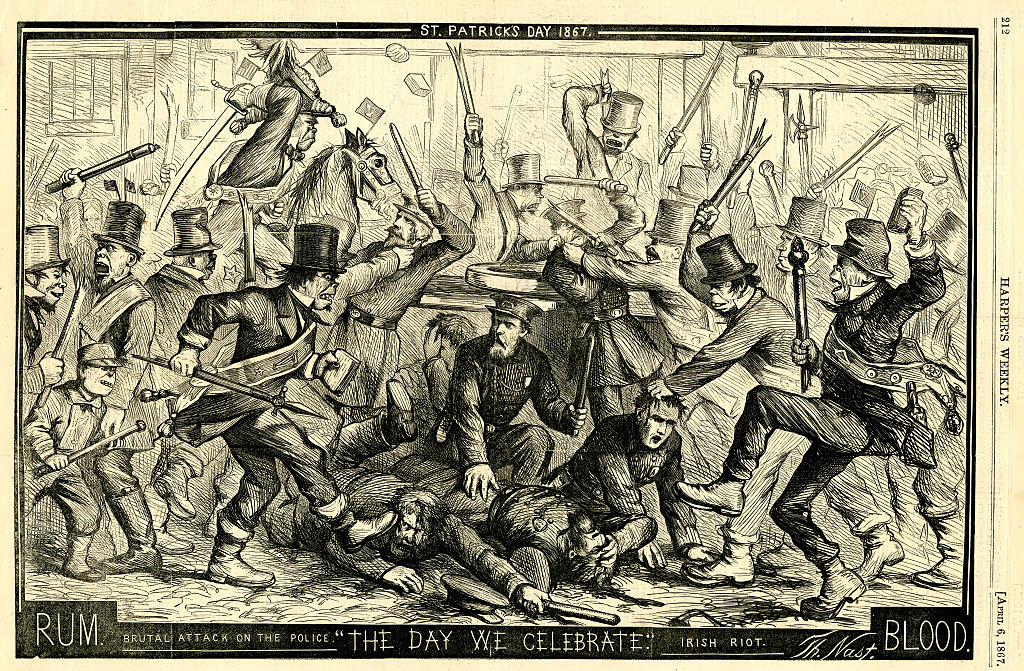 A Portland journalist visiting Waterville in 1894 described the Plains, the city’s Franco American neighborhood in condescending terms, noting “the delicate shades and distinctions of color between the babies and the dirt they roll in.” She also compared French and Irish immigrant communities by saying “the abounding wealth of one being in babies and dogs; the other in babies and pigs.”

Just as today’s anti immigrant campaigners worry about the influence of “foreign values” in schools, so did the their predecessors. The Ku Klux Klan gained a foothold in Maine by decrying the influence of Catholics and Jews on public school boards.

Today’s critics of multiculturalism complain that they are losing their country, or that immigrants are taking over. The sentiment would have been familiar to readers of the Maine Klansman, the newsletter of the KKK, which described Lewiston as

If anyone walks down Lisbon Street in Lewiston, he will certainly think that he is in Quebec, or an alien land, instead of the United States. French is spoken nearly everywhere.

Responses to the perceived threat from French Canadian immigrants varied from the outright violence perpetrated by the Klan and their 19th century predecessors, the Know Nothings, to legislation targeted at immigrants. Successive efforts targeted immigrants’ ability to get citizenship, and vote with that citizenship (1855); prohibited them from serving in the militia (1856); instituted a literacy test to deter Non English-speaking voters (1892); and prohibited children from speaking French in public schools (1918). Many of these were not repealed until the civil rights era of the 1960s. Maine’s longtime prohibition law was motivated by the stereotype of the drunk Catholic immigrant, and it led to the disproportionate arrest of Franco-Americans.

Today’s anti immigrant crusaders like to think they’re responding to a unique threat on their culture or way of life. But they’re not. For the most part, they’re just repeating the same arguments we’ve heard for decades. Arguments that have proven time and again, to be false.