“I hear you’re thinking of running for the House. I can tell you right now they you’re not going to win. Now, if you’re interested in politics, you should start by joining the County Democratic Women’s Club. They’re getting ready for a card party as a fund raiser. You can help them set the tables. That’s where you start.”

That was Georgette Bérubé’s introduction to Maine state politics in 1970. Although women had been serving in the legislature ever since women gained the right to vote, her candidacy was still something of a novelty fifty years later. This was especially true in Lewiston’s Democratic Party, which was dominated by men. A classic “good old boys club,” as Bérubé herself described it. The city had never sent a woman to the state house before, and wouldn’t elect a woman as mayor until Lillian Caron’s bid in 1975. 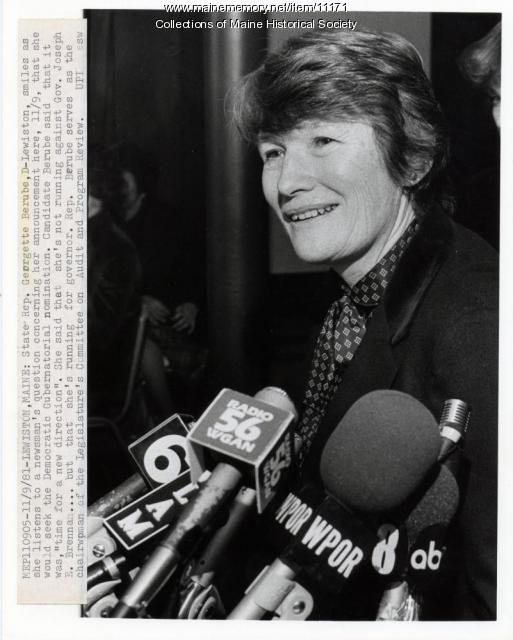 By the 1970s, Franco Americans dominated the Democratic Party in Lewiston, and the city was such a Democratic stronghold for most of the 20th century that the party ran city politics. In fact, Francos ran something of a political “machine” in Lewiston before WW2, in the mold of similar operations in Chicago, Boston, or New York. At least some of the exclusion of women was probably due to the fact that politicking took place in the male only Franco social clubs around town.

At the head of the party in Lewiston, and indeed the state, was Louis Jalbert, who had called Berube with the ominous message one evening. Such was Jalbert’s political clout that he was known as “Mr Democrat.” When he made “suggestions,” party members took notice. In her autobiography, Bérubé alleged that the Lewiston machine was mobilized against her in that first run, with sheriff’s deputies taking down lawn signs at dusk, and supportive businesses threatened with losing their licenses if they openly endorsed “that broad.”

Georgette was not so easily dissuaded. As she later recalled, she wanted to “make policy, not coffee.” In fact, part of what had spurred her to run in the first place was a feeling that some local politicians were either corrupt or negligent. Presumably this introduction from Jalbert only confirmed that suspicion.

What she lacked in support from local politicos (“what would a woman know about politics?” one told her) however, she gained at home. Her husband, Gerry, also received a call from Jalbert. He was told to “keep the little woman at home to take care of the kiddies.” Instead, he told the veteran legislator to tell Georgette that to her face. He was sticking with his wife. Bérubé alleged that Jalbert tried to follow up on his threat years later by having Gerry fired from his job.

Gerry, along with Georgette’s brother, Maurice, supported her throughout that first campaign, including replacing lawn signs as fast as her opponents could remove them. Her mother was more wary when told of Georgette’s plans to run – “why would you want to do that? They’re not honest people!” Georgette’s father had died when she was young, but her experience with Maurice, of running the family business (Beauparlant’s Furniture) may have contributed to her sense of self-confidence.

Undaunted by the overt hostility from the establishment, Bérubé ran a grassroots campaign, pressing the flesh with voters across the city (before 1978, Maine’s cities and large towns elected multiple representatives at leave instead of by wards). Even gruff mill workers were won over by her earnest efforts. “Une femme? Pourquoi pas?” said one prospective voter. Georgette’s campaigning paid off, and she finished third in the primary of 14 Democrats, enough to take her to the general election, where democrats were elected to all six of Lewiston’s state house seats that year. Of the six Lewiston Democrats , Georgette finished first that November (besting Jalbert by a singe vote). 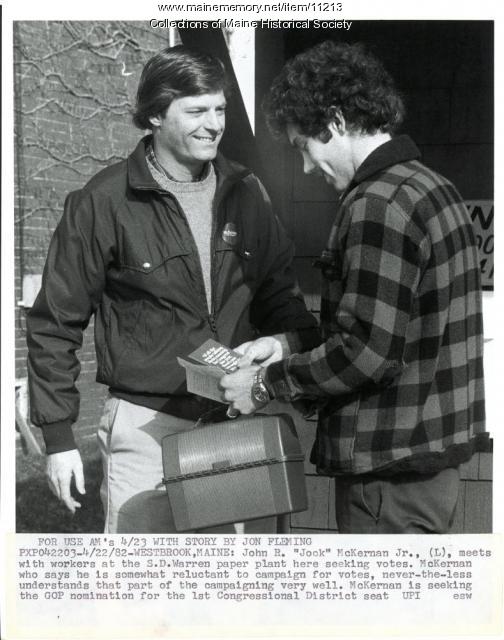 Likely encouraged by this popular mandate, Georgette built a reputation as an independently minded lawmaker in Augusta, breaking with her party on many issues. One of the first was the set of electoral reforms pushed by Republicans in 1972, which eliminated straight ticket voting via the “big box” system, abolished the at-large districts. Since both these mechanisms were thought to advantage Democrats, Georgette’s crossing of party lines was a big deal. Nonetheless she saw it as a way to improve accountability for legislators. Likewise, she was one of few incumbents who openly supported the 1996 constitutional change to impose term limits on state representatives, even though it led to her being forced out.

Given her experiences in her first run for office, Georgette may have understood more than most the value of disrupting the established political order.

She would continue to make waves with unorthodox alliances. She was ostracized from the local party when she supported Republican Bill Cohen’s successful 1978 effort to unseat the incumbent US Senator, Democrat Bill Hathaway. Not only did Berube endorse Cohen, she actively encouraged him to enter the race against her fellow Democrat with a press conference at her house! That earned her a primary challenge in her own district (which she easily saw off) and demands she be stripped of her committee chairmanship. Democratic House Speaker John Martin, however, defended her to his own caucus members.

The rebellious streak culminated with an unsuccessful 1982 primary challenge to incumbent Democratic Governor John Brennan. Along with Republican Shelly Huber (who also lost her primary bid), Bérubé was the first woman to run for Governor of Maine.

Bérubé attributed her centrism to a combination of being genuinely open to working with Republicans and concern about what she saw as the leftward drift of her fellow Democrats. Looking back, she said she “felt that my party, the party of Roosevelt, Truman, and Kennedy, was bent on a more liberal course that the majority of enrolled Democrats wanted.” Change, she thought, “must come from within.” She was also a fiscal hawk, an outlook she attributed to her Franco-American background:

“They worked for a pittance in the textile mills, and yet they managed to accumulate real estate wealth simply by hard work. So as a result, they were conservative, fiscally conservative.”

As chair of the legislature’s audit committee, she oversaw efforts to trim government waste.

Her approach and philosophy certainly seemed to resonate with her constituents. Berube served 13 combined terms in the Maine house and senate, a record for any woman. (John Martin holds the all-time record, with more than 40 years of legislative service).

Bérubé’s long career represented a shift in Maine state politics. When first elected, she was one of just 14 women at the state house. Today there are more than 60 (about a third of the total membership). As a centrist from Lewiston, she foreshadowed the city’s drift away from being reliably Democratic. She also represents a similar trend among Franco-Americans statewide.

When Bérubé passed away in 2005, she was praised by leaders from across Maine’s political spectrum, including Susan Collins, Mike Michaud, and John Baldacci. Not bad for the woman who, half a century earlier, had been told to stick to setting the table.

The bulk of the material for this piece comes from Georgette Bérubé’s 2005 autobiography, Thank You, Georgette, part of which is reproduced in Voyages: A Franco-American Reader (Tilbury House: 2007).