Mon pays, c’est l’hiver (my country is the winter), sang Gilles Vigneault, in what quickly became a Quebecois classic after its 1965 release. The tune, with its haunting melody and wistful lyrics has been seen by many as a nationalist anthem, capturing both the cultural isolation of Quebec within Canada, as well as French Canadians’ affinity for the landscape they inhabit, even during its long winter months. The association of French Canadians, and Franco Americans with this season begins long before Vigneault, and has resonated through the centuries.

In the very first years of French settlement at Quebec, in 1616, the French Jesuit Father Pierre Biard noted that they had been taken aback by the ferocity of the Canadian winter. Knowing that Canada and France lie at roughly the same degree of latitude, the early settlers had assumed the climate would be similar:

Nevertheless, whatever the Astrologers say, it must be confessed that this country (generally speaking, at present) is colder than France…[At Port Royal] the snow came towards the end of November, and it never entirely thawed in the woods until about the last of February, unless, as often happened, a heavy rain, or strong South wind came to melt it. But no sooner did this snow melt than more fell. Outside the woods, and in the open places, it did not last any longer than it does in France, but it snows oftener there than it usually does in France. The deepest snow I have seen in that country was not quite a foot and a half. When the Northwest wind (which we call here Galerne) lashes itself into a fury, the cold there is insufferable, but it lasts only eight or ten days at the most, then the weather becomes milder for a while, as it is in France…But whatever I saw here was extreme poverty. Some wretched cabins, open in many places; our food, peas and beans, rather scarce in quantity; our drink, pure water; the clothes of our people all in rags; our supplies found in the woods from day to day; our medicine a glass of wine on great holidays; our restoratives, perchance a trifle from the chase of a little feathered game; the place uninhabited, no footprints upon the paths, our shoes only fit for the fireside. After this, go and say there is no winter in Canada!

Nevertheless, despite these hardships, Briard noted that the water was “excellent,” the air “healthful,” and “despite these discomforts, we always kept our health.”  Such resilience would become a hallmark of the French Canadians, serving them well in the long, dark, cold of winter.

In adapting to the winter weather, the French took their lead from the indigenous peoples of North America. The Indians had developed the snowshoe to traverse long distances easily even across deep snow drifts. The French adopted these tools quickly, referring to them as raquettes, after the tennis rackets which were becoming fashionable at the court of Versailles. Other essentials of winter wear quickly became associated with Canadien culture. The tuque, a close-fitting knit cap, remains ubiquitous, and the French word is even used by many Anglophone Canadians today. Its connection to French Canadian identity is so strong that a red tuque was the emblem of the nationalist Patriote uprising of 1837, mimicking the red “phrygian cap” associated with the French Revolution.

Charles Alexander Smith, Assembly of the Six Counties, 1890. Image: Wikipedia. In this imagining of an address by the leaders of the 1837 Patriote uprising, several members of the audience are wearing red tuques.

Likewise, the ceinture flechée, a woolen belt or sash worn around the waist, served the practical purpose of preventing the cold from creeping in between one’s jacket and pants, but it soon became a part of the national Canadien costume, with different designs and colors associated with different towns or groups.

A Family of Habitants on their Arrival in New England, Harper’s Monthly, July 1893. Image: Google Books. The American image of French Canadians as living in a winter wilderness was so entrenched by the 19th century that this new arrival to the states is depicted here in full winter garb, including overcoat, tuque, and ceinture.

Both tuque and ceinture were essential components of the uniform of the raquetteur, or snowshoer. As the use of snowshoes for hunting and fur trapping became less common, in the early 19th century, the activity was transformed from a practical necessity to a recreational activity. Snowshoe clubs sprang up to organize hikes, competitions, and other social events. While originally restricted to Canada, these clubs were brought by Franco-American immigrants to the United States as well.  Louis-Philippe Gangé of Lewiston founded the first permeant American club, Le Montagnard (“the mountaineers”) in 1923. By midcentury there were dozens of clubs across New England, each with their own associated uniforms with colored coats, tuques and ceintures. 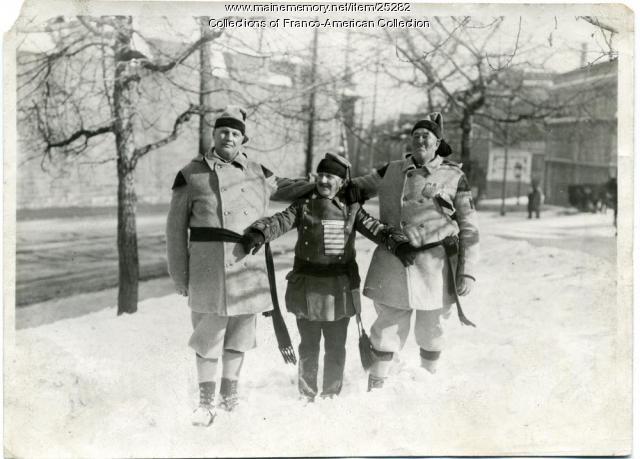 French Canadian immigrants also helped to popularize other winter activities in New England – hockey being perhaps the best-known. While not exclusively a French-Canadian sport, the presence of a large Franco-American community in Lewiston made that city the hockey powerhouse of Maine. The city’s legacy was cemented in 1951, when the amateur team of Bates Mill workers was sent to Europe to represent the United States in the hockey world cup.

Other Franco-American customs are clearly influenced by the long cold nights of midwinter – the penchant for story-telling, and the ability to hold a music-and-dance session at a moment’s notice, for example. Foods, like the celebrated tourtière, which can be consumed at midnight during the reveillon of New Year’s Eve, or soupe aux pois (pea soup), which warms the soul on the coldest nights, are also well adapted to the season. Maple syrup, of which Quebec produces more than any US state, is also a product of the winter freeze and spring thaw.

So if you’re inclined to see winter as a long, hard slog filled with shoveling snow and scraping off car windows, take a lesson from the Canadiens. Strap on those snowshoes, strike a tune on the fiddle, and warm yourself with a cup of pea soup.