Maine Governor Paul LePage once again made national headlines for his defense of President Trump – and by extension, of confederate monuments – when he claimed that 7,600 Mainers fought for the Confederacy. That unsubstantiated claim appears to be off by a magnitude of several hundred, since the known number of Maine Copperheads is around 30.  The governor was clearly attempting to justify the revisionist myth that the Civil War was not fought over slavery, and opponents were quick to point out that more than 70,000 Mainers fought for the Union – the highest per-capita enlistment rate of any Northern State. Mainers are justifiably proud of their state’s abolitionist history, but it’s all too easy to point to the state’s contribution to the Civil War, and assume that Maine’s historical legacy is one of simple racial advancement. Indeed, LePage himself has made similar arguments, saying that Congressman John Lewis, a Black Civil Rights Activist, should “thank Republicans” for ending slavery. The historical reality is much more complex than that.

Many Mainers did fight, and die, in the Civil War motivated by their desire to end slavery. Some, like French Canadian Caleb Paradis, even came to Maine from Canada to enlist. Paradis’s comrades described him as being motivated by “a spirit sensitively alive to the maintenance of right, when he saw the attempts of ambitious men to extend the borders of slavery he sought the states, that he might add his influence and work in the cause of liberty.” Before the war, Colby College graduate Elijah Lovejoy became an abolitionist martyr when he was shot during an attack on his printer’s shop in Illinois. Harriet Beecher Stowe’s Uncle Tom’s Cabin, written at Bowdoin College, became a rallying cry for abolitionists, of which Maine had many. William Ladd of Minot was one such who spoke out vocally against slavery, and many nameless others contributed to the underground railroad and its role in Maine.

Yet at the same time, even many of these abolitionists were initially wary of confrontation with the South. Governor Israel Washburn, a Republican, who denounced slavery as a foundational evil in an 1861 address to the state legislature admitted in the same speech that Republicans weren’t seeking too “interfere” in southern law, and voiced his hope that war could be avoided. When Washburn again addressed the legislature in June, to ask for an appropriation of money and the activation of the militia after President Lincoln’s call for volunteers against the Confederacy, he made no mention of the evil institution, but focused instead on the treason committed against the country. Was Washburn hesitant to alienate some of Maine’s powerful industrial interests? Like the whole country, the economy of Maine relied on slavery, in the form of cotton exports from the south. The industrialization of Maine had flourished in the decade before the civil war, especially with the establishment of numerous textile mills that turned slave-picked cotton into cloth. Some industrialists, like the Cabot family who financed Brunswick’s mill, even inherited fortunes made in the Atlantic slave trade. The Bates mill in Lewiston stockpiled southern cotton in the 1850s, a move that allowed it to profit from the war when it was able to be one of a select few producers of uniforms for the Union army. Other mills, like the Pepperell Company of Biddeford, profited on both sides of the ledger. The Pepperell Company’s “Rock River” line of cloth, named for the Saco River, was originally sold to plantation owners to make inexpensive but tough clothing for slaves.

Even Maine’s best-known civil war heroes were not necessarily fully committed to racial equality. Joshua Chamberlain, the hero of Gettysburg is also admired for his gesture of respect for the Confederate troops at Appomattox, during the surrender that officially ended the conflict. Today, that gesture is often held up as a righteous display of reconciliation. But as Bowdoin College History Professor Patrick Rael notes, Chamberlain’s “chivalry” at Appomattox portended a lack of commitment by many on the Union side towards the hard work or Reconstruction following the war. Chamberlain not only revealed himself to be a moderate in the treatment of former Confederates, but he would go on to defend southern states’ rights to restrict government to “their best minds” (i.e. white ones).

Chamberlain’s colleague-in-arms, General Oliver Otis Howard of Leeds, Maine, was a major figure of the Reconstruction effort. He headed the Freedman’s Bureau, and helped found Howard University, the first of the Historically Black Colleges and Universities in the United States.  Yet after the Freedman’s Bureau was dismantled in the face of Southern opposition, Howard went on to spend years fighting to drive Native Americans onto reservations. Hardly a civil rights icon.

Howard was responsible for directing hundreds of freedmen to Maine during his time at the bureau, finding them paid employment working for friends of his like Adams Merrill, who owned a quarry in Brownville. While these jobs allowed blacks to escape the tenant farmer status of many of their peers in the south, the motives of the Mainers who employed them were suspect. As much as charitable causes, the businessmen were also grateful for a cheap source of labor, and sometimes underpaid the freedmen while housing them in substandard conditions. One third of Merrill’s workers died of pneumonia after a Maine winter in their uninsulated homes the company had provided. The rest fled Maine by 1879. 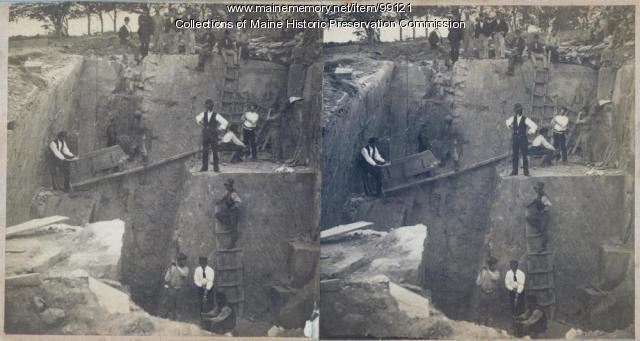 Maine has some prominent examples of historic black spaces, but these are themselves the results of discrimination and segregation as n Maine results of segregation. The Abyssinian Meeting House  in Portland, the oldest surviving black church in Maine, and the third-oldest in the United States, was founded precisely because black parishioners, in their own words, treated like second-class citizens at the existing churches.  The story of Malaga island, and the state-mandated eviction of the community there, has become better known in recent years, but the colony’s very existence, in an isolated and impoverished spot, is a prime example of segregation.

For most of its existence, Maine has not had a vibrant African-American community nor indeed any community of color as we would identify it today.  Nonetheless, Maine’s Republican party, which had initially been active in the cause of Black suffrage nationally, devoted efforts to persecuting immigrants locally, especially Catholics.

James G. Blaine was Speaker of the US House of Representatives during a critical period of Reconstruction. Yet he would emerge as leader of the dismissively-titled “half-breed” faction of the Republicans in the 1880s, less radical than the “Stalwart” faction. Like Chamberlain, Blaine was advocated for leniency for former Confederate officials and veterans. While Blaine was a consistent defender of black suffrage, he was also a notoriously cynical politician, and it’s hard to tell how much he was motivated by moral imperatives, or the desire for more Republican voters in the South. In a similar vein, his name became synonymous with a series of anti-Catholic laws aimed at codifying a separation of church and state, but which became a dog whistle for protestant voter against Catholic immigrants.

“The American River Ganges,” an anti-Catholic cartoon by Thomas Nast that appeared in Harper’s Weekly in 1871. A protestant minister defends American school children against Catholic bishops depicted as alligators. An American public school is depicted as a fort on the beach, while in the distance, Tammany Hall, the well-known New York Irish political society, flies the Papal flag.

Even before the Civil War, Maine had undertaken a series of anti-immigrant measures, many of which were supported by the same politicians who supported the abolition of slavery. In 1855, under its first Republican governor and a Republican majority in the House, Maine passed a series of laws, which barred any state courts from naturalizing non-citizens (thereby restricting citizenship applications to federal courts), made new citizens register to vote at least three months before an election; and restricted the participation of those who were not native-born Americans in militia companies. Portland Mayor Neal Dow became the father of Prohibition in Maine and the United States, a law that was predicated partly on anti-immigrant stereotypes, and which resulted in disproportionate arrests of Franco-American and other Catholic residents.

In the 1890s, as Southern states were adopting “Jim Crow” laws to prevent African-Americans from voting, Maine adopted at least one custom from that period, the literacy test, designed to prevent immigrants, especially Franco-Americans, from voting. This effort was accompanied by local campaigns to overturn election results, or prevent Franco-American voters from registering. In this context, it’s unsurprising that Maine would be a hotbed of Klan activity in the 1920s. The literacy requirement would not be repealed by Maine voters until it was struck down by the courts as a violation of the 1964 voting rights act.

What are we to make of these contradictions? It would be wrong to conclude that every historical character is a villain, or that each was as bad as the other. There were clear lines in the debate over slavery. As early as 1688, Americans (the Quaker community of Germantown, Pennsylvania) had petitioned against the practice, asking “what thing in the world can be done worse towards us?” Jefferson’s first draft of the Declaration of Independence tried to pin the crime of slavery on King George, calling it a “cruel war against human nature itself” and an “assemblage of horrors,” words that southern delegates to the Constitutional Convention in Philadelphia presumably had struck out. By 1861, the United States was one of just a handful of Western nations not to have abolished the institution of slavery. The states which chose to secede over the issue of slavery, and labelled the institution the “cornerstone” of their new Republic, knew full well that they were acting in defiance of the moral consensus of the day. We should feel free to judge their character accordingly.

But we should also be willing to hold ourselves to higher standards than even the “heroes” of the past. Most historical figures do indeed fall short by modern standards. Men who were abolitionists saw no contradiction in being anti-immigrant, or disputing the necessity of black suffrage. Ordinary Mainers (like all Americans) benefited from the slave economy, and the low-wage work of immigrants. The lessons that should be drawn are to push ourselves further, not to give up on progress half-won, and to recognize the need to fight prejudice and discrimination on multiple fronts.