The history of Maine’s brief, but intense, association with the Ku Klux Klan is becoming increasingly well-known. Along with a large portion of the country in the early 1920’s, Maine was home to a Klan chapter with a significant membership, which held significant sway over local politics. While the Klan had its beginnings with former Confederate army officers in the South, and initially targeted African Americans in former Confederate States, by the 1920’s, the “second Klan” had broadened its agenda of hate to include Jews, Catholics, and almost any immigrant. In Maine, from 1923-25, the KKK whipped up animosity against the state’s significant Irish- and Franco-American populations, in particular.

What’s less well covered is the resistance to the Klan and their divisive brand of politics by the groups they attacked. While the group had successes in eliminating Portland’s directly-elected mayor, and a number of other local races, they never completely captured state politics, and their influence diminished rapidly after 1924. US Senator Owen Brewster, who was elected governor in that year, was often accused of courting the Klan vote, but this association has never been proven. Brewster certainly had a record of contesting the right of immigrants to vote, and the KKK itself endorsed his candidacy, but Brewster himself consistently denied being a Klansman, or supporting the group. That the KKK were not able to capitalize on their initial successes is credit to the efforts of Franco-Americans and others to stop them. 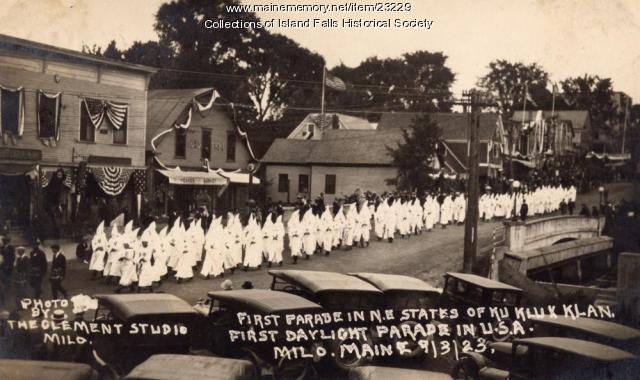 Parade of the Ku Klux Klan in Milo Maine, September 3rd, 1923. Said to be the “first daylight parade in USA” – a sign of the group’s confidence. Image: Island Falls Historical Society/Maine Memory Network.

Francos were able to stymie Klan ambitions in several ways. In a limited number of communities, Franco-Americans actually had enough political clout to crack down on the organization from above. In Lewiston, for example, the KKK were denied use of the city hall for their meetings.  That stood in stark contrast to the situation in majority-Yankee communities, where the group found a warmer reception. Just across the Androscoggin River in Auburn, the Klan met at city hall, to audiences that included members of the police force, and which included sermons by local protestant clergy. When the Saco chapter of the KKK organized a Labor Day march in 1924, it was prevented from entering Biddeford by members of the city’s police force and fire department. Again, the difference between the two communities could not be more stark. While Biddeford’s city government stood firmly against the Klan, the Biddeford Weekly Journal reported that the several leading Klansmen were bold enough to march without masks, and that

“Well-known Saco citizens on horseback rode along the streets ahead of the parade and kept the crowds in line and special [constables] paraded through the crowd with drawn clubs.”

The Saco event very nearly ended in violence. One Biddeford police officer drew his revolver, but no shots were fired. In a surreal twist that demonstrates the Maine Klan’s fusion of bigotry and polite society, the parade culminated in an anti-Semitic and racist speech by a speaker from New Hampshire, after which, the Journal reported, “a fiery cross blazed forth and later the Klansmen returned to city hall and had more light refreshments.”

Labor unions also fought back against the KKK, and sought to organize the very immigrant workers the Klan demonized. On February 2, the KKK tried to evict an organizing group of the Industrial Workers of the World (IWW) in Greenville. About forty Klansmen went to the boarding house where IWW delegates were staying, and tried to intimidate them into leaving town. In response, the IWW called in its local members – who were mostly woodsmen – for a show of support. On the sub-zero night of February 4, nearly 175 union members, many of whom were Franco-Americans, marched in Greenville to oppose the KKK. IWW leader Bob Pease accused the Klan of working with the lumber companies, town selectmen, and the local YMCA to try to oppose the unionization of lumber workers.

Anti-KKK poster by the Industrial Workers of the World (IWW), 1921.

Sometimes, however, Franco-Americans did not have the protection of local governments or the strength of labor unions to help them. A July 1st gathering of Klansmen in Fairfield (just south of the Franco-American stronghold of Waterville) was disrupted by unnamed local “youth” who threw stones at the Klansmen’s cars. The brief gathering was broken up by about 200 locals, who far outnumbered the fifteen or so Klansmen. No-one was injured, but a sign of the KKK’s prominence in the town can be found in the account of the incident found in the Waterville Morning Sentinel of July 3rd, 1924. The injured Klansmen included “a local businessman” and at least one individual known to the police chief.

Franco-Americans and other minority groups are often depicted solely as victims of racism and discrimination. Not to acknowledge the steps these groups took to oppose bigotry is a mistake that undervalues their agency, and contributions to their own struggles. One of the lessons of the rise and fall of the KKK in Maine is that racism and hatred can be opposed when we stand up together and fight back.