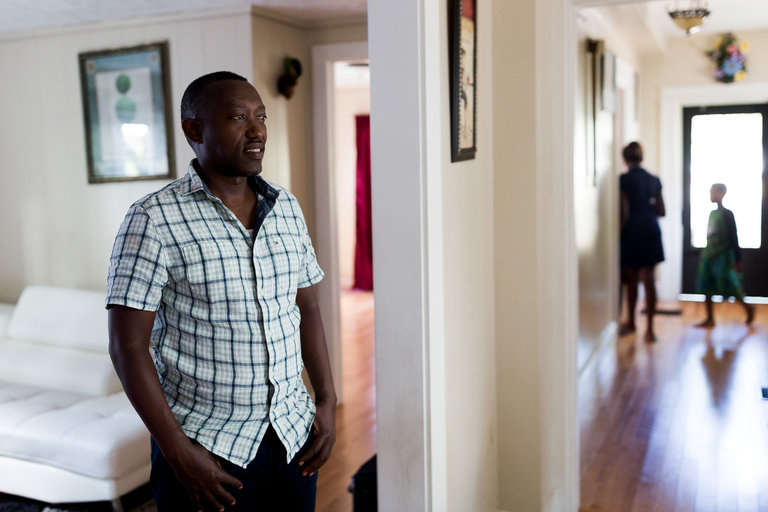 Less than a century since the Maine legislature was engaged in passing laws restricting the use of French in public schools, restricting the ability of French Canadians to naturalize, and imposing literacy tests on voters, French was heard in the halls of the state house.  At least a dozen New Mainers – immigrants to the state, primarily from Francophone Africa – came out to testify against Governor LePage’s proposed budget, which would greatly restrict access to food stamps, Temporary Assistance for Needy Families, and General Assistance for asylum seekers. The eighty people who came out to speak against the proposals comprised individuals from all walks of life, but the testimony of former refugees was particularly powerful, and included many accounts of the sheer difficulty faced by new arrivals.

Those testifying against the cuts to the state’s safety nets – which Health and Human Services Commissioner Mary Mayhew described as empowering those in poverty – did so primarily in English, but a number did speak in French. In the absence of any official translator, their stories were relayed to members of the assembled committees with the help of fellow New Mainer, Leopold Ndayisabye.

The diversity of the New Mainer community was on full display, with testimony from individuals originally born in Somalia, Burundi, Djibouti, Rwanda, Gabon, and Congo-Kinshasa.  Each had their own compelling story of life as a new arrival in the United States, fleeing oppression, terror, and danger.

Ndayisabye himself sought asylum in the United States in 2011, having fled Rwanda in fear of his life. Before becoming a refugee himself, Leopold had spent a decade working in humanitarian relief and community development for the American Red Cross and other organizations. He is now a case worker at the Preble Street Resource Center in Portland. From helping others, he was persecuted and “physically and mentally tortured” in his home country – an ordeal that drove him to seek asylum, leaving behind his family and possessions.

Burundian Sebastian Bukuru was similarly targeted for his humanitarian work in his home country. He and his wife trained members of church congregations on dealing with war-time trauma (Burundi was engulfed in civil war for over a decade until 2006). Alerted by friends that they had been targeted by the security forces, Bukuru and his wife applied for American visas. It was, he told the legislators “the hardest decision of our lives.”

Heritier Nosso was threatened with arrest and torture for organizing youth protests against the President of Congo-Kinshasa (also known as the Democratic Republic of Congo) when he conspired to hold onto power beyond his constitutional term limit. A lawyer by training, Nosso could not practice when he arrived in the United States. Unable to work, isolated from his family, and worried about finding food and housing, he “was about to commit suicide” when he came to Maine. Government assistance for food and housing turned her situation around.

The same was true of all the immigrants who testified at the hearing. Bukuru’s wife, Penine, was injured in a car accident and receives food stamps and supplemental social security income (SSI). Abdiqani Ibrahim Abdi, a Somali immigrant now living in Lewiston, brought his parents to the United States only to have his mother suffer brain damage after complications from rotator cuff surgery. The couple, which had previously been self-sufficient, turned to SSI and food stamps for support after Abdi’s father had to leave his job to be the mother’s full-time carer.

Abdi himself, like most New Mainers, works incredibly hard to support his own family, as well as his parents. In addition to a full-time job and part-time evening work, he drives for Uber for extra income. Mouna Ismail, originally of Djibouti, made clear that the support provided her and her family from the safety net were essential on setting her on the path to getting an Associate’s degree in International business. Her dream is to establish a women’s clothing store and exercise space.

The value of government support for new arrivals to our state and country was on full display at the hearing. Recent immigrants are better-educated and younger than Mainers as a whole. Our state needs them to ensure the vitality of its future economy. Sometimes the journey from asylum-seeker or visa-holder to permanent resident is difficult. Bukuru’s asylum hearing was delayed after the car accident, and he and his wife are now seven years without a decision on their legal status.  Waiting equally long is Rwandan Pierre Kayiranga, who, at age 75, has been diagnosed with a failing memory – a situation that has made it difficult for him to testify at asylum hearings, and which leaves him unable to work. Without the availability of safety-net programs, Kayiranga, said he would be heading “straight to the cemetery.”