The right of political asylum has brought to this country many a man of noble character and elevated purpose who was marked as an outlaw in his own less fortunate land, and who has yet become an ornament to our citizenship and to our public councils. The children and the compatriots of these illustrious Americans must stand amazed to see the representatives of their Nation now resolved, in the fullness of our national strength and at the maturity of our great institutions, to risk turning such men back from our shores without test of quality or purpose.

President Woodrow Wilson’s words from a hundred years ago still resonate today. They could easily be applied to President Trump’s executive order suspending the United States’ refugee program and all arrivals from seven designated countries.  And the bill Wilson was vetoing, the Immigration Act of 1917, shares many similarities with the recent presidential action, especially in its reception and the controversy it has created.

For almost a century of its existence as an independent country, the United States had no federal immigration policy. Arrivals came from a variety of countries without restriction. This is not to say that they were universally welcomed. New Americans faced a variety of challenges, and often outright hostility and discrimination. In New England, this prejudice was directed primarily at Catholics; as Asians began to migrate to the West Coast, they, too, faced attacks of varied kinds.  The first piece of federal legislation was the 1882 Chinese Exclusion Act, which barred all new arrivals from China, based almost exclusively on racist and discriminatory views. Just a year earlier, French Canadians were being referred to as “the Chinese of the Eastern States.”  It was not a compliment. By the 20th century, federal lawmakers were growing increasingly concerned about what they saw as the declining homogeneity of America – and they placed the blame squarely on immigrants.  A commission, headed by Vermont Senator William Dillingham, was convened in 1907 to examine the issue.  A read-through of the report’s findings is illuminating of attitudes of the time. The authors were concerned about education, disease and criminality among potential immigrants as well as the potential for the country to be over-burdened by sheer volume. These concerns are all alive today. But the most telling piece of the commission’s findings is the “dictionary of races or peoples.” This section, which makes no distinction between race and ethnicity (Hebrews, Italians and Negroes sit side-by-side), demonstrates exactly whom Americans saw as being problematic.

Italians are singled out for their low literacy rate, and their ties to organized crime.  Jews (or “Hebrews”), the authors note, are slow to assimilate. Both groups, along with Asians and Russians, are deemed to be especially problematic for the sheer number of them who could potentially come to the United States. Some descriptors are openly hostile; Indians (“Hindus”) are described as “filthy.”  Throughout the dictionary, the primary religion of each group is carefully noted.

The immediate result of the Dillingham Commission was the 1917 immigration act, that imposed a literacy test on new immigrants, required that they be screened for diseases (which at the time included homosexuality), and imposed an “Asian Exclusion Zone,” barring arrivals from China and Southeast Asia (Japanese immigrants were not excluded).  By 1924, however, the exclusions had widened as a national quota system was imposed.  Arrivals would be limited to 2% of the existing national population, as counted in the 1890 census.  Using a benchmark from a quarter-century before reinforced the act’s effect of favoring existing racial and ethnic populations in the US.  Thus arrivals from Northwest Europe were heavily favored over Southern and Eastern Europe, and particularly Asia and Africa.  Arrivals from the Western Hemisphere (including Canada) faced no quotas.

Was the 1924 act, which was in force until 1965 discriminatory? That’s a question roiling around President Trump’s executive action. And in words that echo the statements of Trump ally Rudi Giuliani, contemporaries who favored the act betray that the intent of the act was certainly to exclude undesirable nationalities. The Daily Missoulan of Montana, wrote approvingly of the supporters of the 1917 literacy test:

It was avowedly a movement to change the immigration laws, so as to make more difficult the coming of immigrants from Spain, Portugal, Lower Italy, the Balkan States and Turkey, while permitting the incoming of immigrants from the countries of northern and Central Europe, that are peopled by the White Race…while the literacy test is not a perfect test of desirability, in a larger way it seemed to be the only practical method of accomplishing the purpose sought.

Meanwhile, the Labor World of Duluth, MN, contended that “Unrestricted immigration in the past has been responsible for many of the problems now confronting labor in this country,” blaming those workers for undercutting American workers – another theme that sounds familiar today.

Clearly, in the case of early 20th-century immigration policy, the intent of the legislation was clear to its supporters, even if the letter of the law was not overtly racially or ethnically prejudiced. 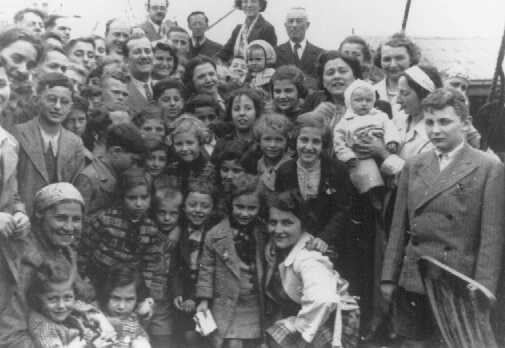 Jewish Refugees aboard the SS St Louis, May/June 1939. The St. Louis passengers were denied entry to either Cuba or the United States. At least one quarter of them were killed in the Holocaust. Courtesy US Holocaust Museum.

Another warning for us today lies in the consequences of the 1924 act, which make President Wilson’s words all the more prescient.  The quota system greatly restricted the number of Jewish refugees and other people fleeing the Nazis during the 1930s. Entire ships of refugees were turned back if the passengers had no visa, and US policy did not change until several years into the Second World War. The most famous refugees denied entry were the family of diarist Anne Frank, who perished in Bergen-Belsem concentration camp at the age of 15.

As President Wilson noted, the United States has a long history of providing a refuge to people from around the world – whether the deported Acadians from Nova Scotia, French-Canadians facing economic hardship or countless numbers fleeing war and violence. America has dabbled in isolationism and closing its doors before – and the results have been deadly.