I never in my life saw such troubles…It is awful here.  Everything has gone up and yesterday afternoon all the big stores had to close up because they didn’t have everything left.  Flour has just tripled in price and in a week will be out of reach.  Butter has doubled.[1]

This was the scene that greeted Arthur Tétreault of Augusta, Maine, on the start of a new school year in 1914.  Tétreault, a student at the University of Louvain (Leuven), in Belgium found himself, unwittingly, in the epicenter of the First World War.  As he wrote to his parents back home,

We are in a hot box here and everyone is up in arms. This time it is a general war and all the countries in Europe are in for it…All the Belgian troops have been called to the front to defend the Belgian frontier.

Tétreault, a young man [2] was an able student from a relatively well-to-do family – his father, also Arthur, was the first pharmacist in Augusta’s French-Canadian community, and would serve on the city’s board of education from 1916-28. The younger Arthur graduated Cony High School early, in 1910, and, as was common for Franco-Americans of his era, went to college in Montréal, at the Collège Sainte-Marie of Montréal, a Jesuit College. In 1911, he went to Europe to continue his studies in at the Belgian university, hoping to complete a degree in law.

These plans were turned upside down in the summer of 1914, as were the lives of so many in Europe at that time. As he wrote to his parents in August, “All the schools, colleges and universities have put over their exercises until October by order of the Belgian government.”  But Tétreault’s alma mater, the University of Louvian, would not reopen in October for classes.  On the 25th of August, the German Army reached Louvain, and began a brutal occupation. Much of the town was burned and looted, civilians were executed and the university’s library was destroyed.  The “Sack of Louvain,” especially the destruction of the library and its manuscripts, defined the German army in the eyes of their enemies and even Americans, who were technically neutral in the war until 1917. 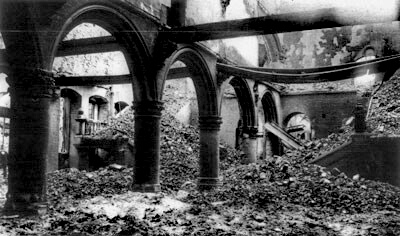 Ruins of the library of the University of Louvain, 1914. Image: Wikipedia

With his college in ruins and the realities of the world’s first total war beginning to be felt, Tétreault initially enlisted in the Belgian Red Cross (perhaps drawing on his experience in the family business) but by the winter of 1914/5, he applied to the American Consulate in Brussels (by then occupied by the Germans) for an emergency passport [3]. At this point, the twenty-something could easily have followed the thousands of other Americans in Europe and returned to the United States, or sought safety in a neutral country like Switzerland. Instead, Tétrault went to Paris, a city still very much under threat of occupation itself, and enlisted in the American Field Service. [4]

The American Field Service was a volunteer organization begun by A. Piatt Andrew, a former Deputy Secretary of the US Treasury and a Professor at Harvard. Members assisted in the war effort by transported the wounded from the front lines in motorized ambulances. It began with the participation of American volunteers at the American Hospital (or Ambulance in French), in Paris in 1914, but expanded to become a field service in 1915. Known as the group of “Gentleman Volunteers,” it primarily composed of students at American colleges, especially Harvard. Tétreault does not appear to have written home about his time in the field service, but a fellow Maine Franco-American, Albert LeTarte of Brunswick, wrote several letters to his parents on his experiences:

Night driving is rather fascinating for we are not using lights.  All we have to guide us is the row of trees on each side of the roads and a white panel on the truck ahead of us.  There are two men on each truck and a convoy is composed of eighteen trucks.  When all are in motion people run out of their houses as we go by, for the noise is terrific.  Most everywhere we go we are met with shouts of “Vive l’Amerique.”

We shall leave here tomorrow for active service at the front.  Every one is very anxious to go for life at this camp is rather monotonous.  I cannot tell where we shall go for we are not permitted to do so.  My hope is that we can go to Belgium. [5]

LeTarte’s enthusiasm for the war, apparently undampened by the prior three years of slaughter (he had enlisted upon the US entry into the war in 1917), was not dissuaded from his conversations with local Frenchmen (something possible through his fluency in French):

While conversing with a father of two sons gone to war, he, with tears in his eyes said: “The younger of my sons had been shot at the beginning of war; after hearing this, my elder son started, saying: “Father, I shall revenge my brother.  Never shall I cease fighting until I attain my aim!” [6]

The patriotism and determination of the French population to continue to resist the invasion of their county is reflected in the number of Franco-Americans who, like Tétreault, volunteered to serve, even before the United States entered the conflict in 1917.  Some volunteered for aid agencies like the American Field Service; others gave money to the Red Cross relief funds; some even went to Canada to enlist in the Canadian armed forces (an act which often got them into legal difficulties on their return to the states).

Tétreault’s story after 1915 is unclear.  His obituary states that he continued in the AFS (though he only appears in the official list of drivers for 1915), assisting the French and Italian armies, though he was apparently reluctant to relate these experiences to his family back home. [7]  In the course of this service, though not a soldier, he was severely injured – he was a victim of poison gas attacks and suffered chronic pain from shrapnel lodged in his body for the rest of his life. His obituary states that “his body [was] shattered and with the recollection of many terrible experiences.”  These injuries would lead to his early death in 1929, before the age of 40.

Arthur Tétreault, like many men of his generation, was humble and modest about his war-time service.  He didn’t boast or brag about his everyday heroism under difficult circumstances.  And this is all the more remarkable for a young man who had war thrust upon him – a war which was technically not his – and who could easily have fled a continent ravaged by war for the comfort of home.  Instead he stayed and served.

[4] US passport records show that Tétreault spent at least a short time in London in early 1915 – perhaps seeking a permanent passport to replace his emergency one issued in Brussels.