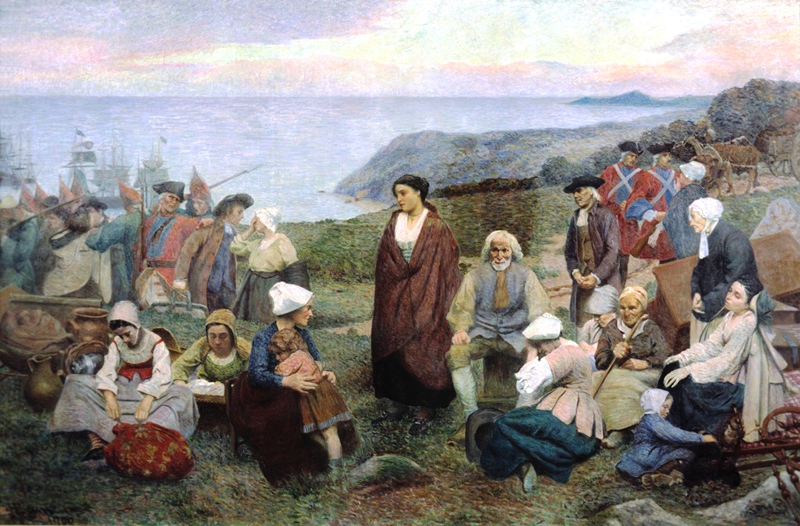 A threat to security; a liability on the public purse; unwanted and unwelcome.  Those sentiments have been applied to today’s refugees, especially this election cycle – but they were also the feelings of many New Englanders to the thousands of Acadians who found themselves placed in towns across Massachusetts (including the District of Maine) in the 1750s and ‘60s. The Acadians weren’t quite refugees, nor were they economic migrants like their French-Canadian cousins who would come to the region in the following centuries in their hundreds of thousands.  The Acadians were prisoners and deportees – civilian victims of an undeclared war; described by some as genocide.  In 1713, the British had conquered the portion of Acadia that they called Nova Scotia, as well as the northern part of Maine. Although Great Britain and France remained at peace in the following decades, settlers in Maine and Nova Scotia continued to come into conflict with the Acadian inhabitants and, in particular, the Native Americans with whom the Acadians shared close relationships.  A series of guerilla conflicts, including Father LeLoutre’s War and Father Rale’s War, not only continued to alienate the English-speaking ruling class from their Acadian subjects, but also increased the desire of land-owners and settlers (many of them from Massachusetts) to gain control of the Acadians’ lands.   When France and Britain went to war again in 1744, the British soon found the sympathies of their Acadian subjects to be with the French.

The result was the Grand Dérangement, or “Great Upheaval” – the expulsion of the Acadians from their ancestral lands, and the defining tragedy of the Acadian people.  As noted above, some historians refer to the event as a genocide, though the objective was eviction, rather than mass murder.  Nonetheless, in their paranoia about the divided loyalties of their French-speaking subjects, and their greed for the Acadians’ fertile land-holdings, the Anglo-Americans caused the death of hundreds.  Many Acadians perished in the wrecks of the ships that were transporting them from their homes; unknown numbers surely died of hunger and other deprivations suffered in exile.  At the direction of Charles Lawrence, the British governor of Nova Scotia, Acadians across the colony were directed to come to their parish church for an important proclamation.  In the presence New England militiamen who had been sent from Boston for the purpose, those who came to the churches were ordered to swear an oath of loyalty to the crown or face deportation.  The oath was unacceptable to the Acadians (and designed to be so), because it required them to acknowledge the King of Great Britain as the head of the Church of England – in essence, to recant their faith as Catholics. 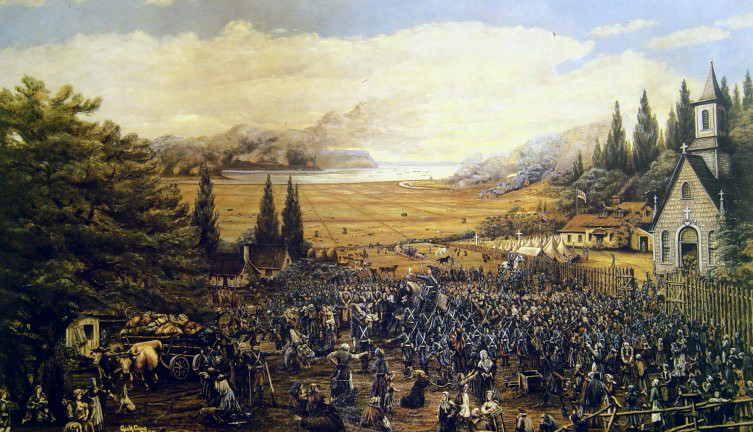 The Deportation at Grand-Pré, 1893.  Image: Wikipedia

For their refusal, thousands of men, women and children were forced onto ships and sent into exile.  Their lands would be confiscated, and the Acadians would be scattered across Britain’s colonies, too dispersed to be a security threat any longer.  Around two thousand  were sent to Massachusetts; many hundreds more made their way there from southern colonies in the years to come.  Although the Massachusetts diaspora is fairly well-known, the status of the few dozen Acadians apportioned to the “District of Maine”, then a part of the Commonwealth, has commonly been overlooked.   As with many Acadian exiles, records for this group are hard to come by.  The new arrivals were destitute; few of them would have been literate, let alone in English, and they were often shuttled from town to town.  To add to the difficulty, their names are often Anglicized, so Roy became King and Doucette became Dowset.  Nonetheless, what evidence does survive shows that these first Acadian arrivals in Maine were typical of their thousands of fellow-exiles across British North America.

The Committee on the apportionment of Neutrals for the Commonwealth of Massachusetts was assigned the task of dividing the colony’s Acadian population between its various towns.  The task was a delicate one, because the Acadians were, frankly, unwelcome.  Since they had been required to leave their possessions behind (and, in any case, most had been farmers, whose wealth had been in their now-forfeited land), they were paupers – which made them the responsibility of the various towns to which they were assigned.  The board of overseers of the poor in each town was responsible for seeing that the Acadians were clothed, housed and fed, sometimes by entrusting an Acadian family to a wealthy local family.  In 1760, the Committee reported to the General Court that it had assigned  61 Acadians to towns in Maine.

The bulk of these individuals appear to have come to Maine from Point Shirley (Winthrop, MA), and for some, this wasn’t the first time they had been shuffled from one town to another. The records of the General Court contain numerous petitions from towns complaining at the number of Acadians (or “French Neutrals”) they were required to support.  John King (Jean Roy)’s family of ten were in Billerica in March 1759, but were sent to Dunstable later that year, when the selectmen of Billerica complained there was “not enough available housing.”  Just six months later, in June 1760, the Kings were among those moved to Point Shirley for removal to Maine.  Similarly, Peter White (Pierre LeBlanc), his wife and five children were supported by the town of Littleton in late 1758, before being sent by the Littleton Selectmen to Point Shirley in 1760.

It’s clear that even before the 1760 reassignments, there were some Acadians already living in York County.  Caleb Symmes, a ship’s captain, claimed reimbursement for transporting just thirty-three Acadians from Point Shirley to York that July, so the sixty one individuals listed by the Committee probably include those already in Maine.   As early as 1756, Francis (François) LeBlanc petitioned the General Court that he be moved from Point Shirley to the Town of York, “for his more comfortable subsistence among some friends and relations of his who dwell there.”  Ultimately, however, the committee determined to assign LeBlanc to Needham – without offering an explanation. Once again, the town of York may have been reluctant to accept the cost of another Acadian family.

Another early Acadian arrival in Maine was Peter Douset (Pierre Doucette) and his family, who came to Wells on 15th January, 1756.  The Doucettes were assigned to the care of Colonel Nathaniel Donnell, who put them up at a cost of 30 shillings a week to the town.  In 1757, Pierre’s wife [name?] fell pregnant, and Donnell had a new house rented for the family’s use.  In a petition to the General Court for additional reimbursements, Donnell wrote that she was “disordered the whole winter and not able to do anything to support the family, and I was obliged to find wood for two fires the most part of the Winter.”[1]

The Doucettes were under the responsibility of Colonel Nathaniel Donnell; another family, the Roys (Kings) were similarly the responsibility of a veteran of the French and Indian Wars – Major Richard Cutts of Kittery.  Both Cutts and Donnell had participated in the siege of the Acadian fortress of Louisbourg in 1745, and one can only guess how the Acadians responded to the irony of bring under the “care” of men who had been partly responsible for the conquest of their homeland. 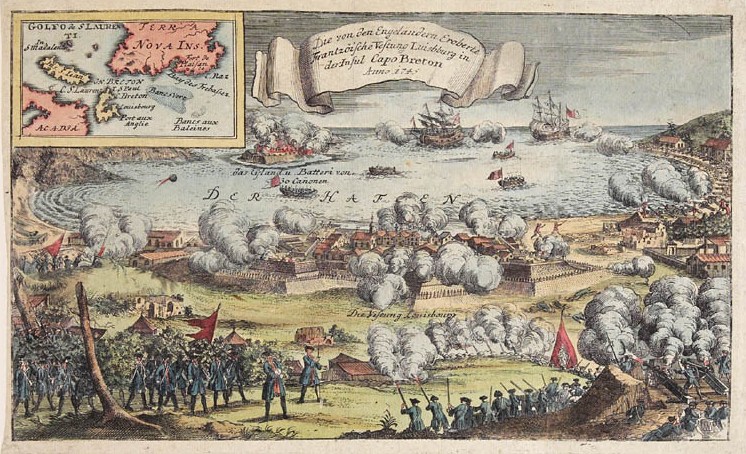 The final fate of most of these early Maine Acadians is hard to determine.  Some, no doubt, returned to Nova Scotia, or found their way to countrymen in Quebec or even Northern Maine.  One John Mitchell (Jean Michaud) is recorded as having come “to York and thence to Wells about 1760, returned to York, and later made his home in Canada.”[2] One of the ironies of the deportations is that, just a few years later, in 1763, Great Britain all-but evicted France from North America, conquering the final French colony of Canada. The security threat posed by the Acadians was over.  In fact, faced with growing dissatisfaction from their American colonies, the British authorities would eventually undertake a dramatic reversal of policy and guarantee freedom of religion for Catholics in Canada in 1774.  In 1764, the British allowed Acadians to return to Nova Scotia, in return for an oath of allegiance.

As a result, many Acadians made their way out of exile; some petitioned to leave, while others were repatriated (or re-deported) by their New England towns only too happy to be rid of them.  In 1767, the town of Kennebunk voted that “Joseph Denico [Denicourt], a Frenchman, should be Transported to Quebeck in Kannaday [Canada] at the charge of the town.”  Despite this, Denicourt appears to have been one of those who chose to remain; it must have been a difficult choice.  While most Acadians had no ties to Quebec, and would be no better off there than when they had arrived in Maine, life in New England was tough. As late as 1765, the General Court heard a petition from a John White (Jean LeBlanc) of Falmouth (Portland), begging relief from taxation “which adds greatly to their distress…until they shall get into a way of business to provide for themselves and Families.” Nonetheless, Denicourt was buried in Kennebunk in 1790, leaving behind a number of children.[3]

The spotty history of the Acadian deportees in Maine is emblematic of their history elsewhere – regarded as something between a nuisance and a public burden, and at the whim of local and colonial governments, they were shuttled from place to place as they struggled to find make a living for themselves.  It’s no surprise that many chose to leave; it’s a testament to their hardiness that some chose to stay – and it’s unfortunate that we don’t have more records of their struggles and accomplishments.

Appendix – Movements of the Maine Acadians

[5] Charles Banks History of York Maine, Vol. 1 (nd, np) reports an additional child was born to the Doucettes in 1757.  However, he only reports 7 of their 9 children having arrived in York with them in 1756.

[6] Daniel Remich, History of Kennebunk from its earliest settlement to 1890 (n.p, 1911), p526 reports that the Michauds returned from Wells to York at some point, presumably after 1760, and then returned to Canada at an unknown date.

[7] Charles Bradbury, History of Kennebunk Port 1602-1837 (Kennebunk , 1837, reprinted 1967), p238 notes that the Denicourts remained in Arundel/Kennebunk, and that Joseph and his wife eventually had seven children together.

[9] A John White of Falmouth is the lead signatory of a petition on behalf of the Acadians of Falmouth (Portland) in 1765. He could be the “not yet returned” child of the 1760 assignments, or this could be an error in the petition.

[10] Since no records exist of Acadians having ever arrived in North Yarmouth, Georgetown or Brunswick, it is quite possible that they were never sent as assigned.