You can’t always believe everything you read. That adage is equally applicable in our modern internet age and when reading 19th century newspapers. So the following story, which appeared in the Ellsworth American, January 18, 1899, is offered with the caution that it hasn’t been corroborated with any other sources. Whether or not it’s inspired by true events, this ghost story from Maine’s St John Valley can teach us something. 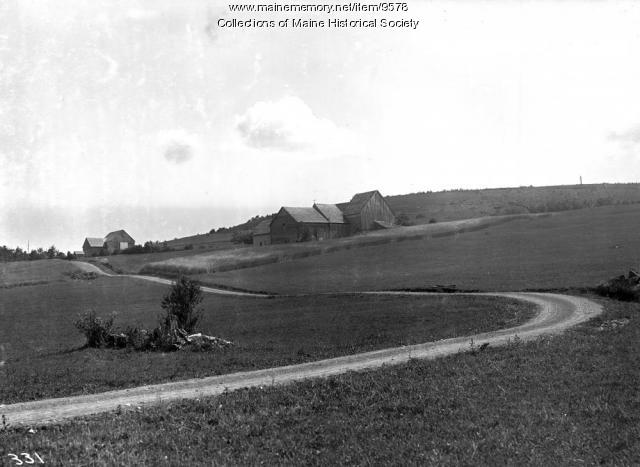 The story was submitted to the American by Harry L. Crabtree, a young Ellsworth lawyer (he was born in 1877) and future judge. Crabtree claimed to have heard the story directly from a man he calls only “French Louey” (Louis). Crabtree says he spoke to Louis as well as his friends and neighbors living somewhere along the St John River in northern Aroostook County. He describes Louis as

“A typical French Canadian, short, broadfaced, with a growth of light, curly whiskers covering his face clear to his eyes.”

Crabtree related the story in his imagining of Louis’ accented English, which Crabtree said sounded “not unlike broken Dutch or Negro, perhaps.” You can read that version at this link, but since Crabtree’s dialect is hard to read, potentially offensive, and probably inaccurate , I’ve provided a standard English version:

“You want to know about that fellow in gray who gave me the beating? Why it’s just like this: You see, I live over there by the schoolhouse, and one fall about five years ago we had a young fellow come teach the school. I think perhaps he was smart, but you see he tried to teach my little boy something foolish. He called it “algebra” and it’s all about letters and x’s and things, but it didn’t teach him a thing about selling buckwheat and potatoes.

“Well, that made me mad to have my little boy waste his time in that way, and I told the teacher to stop that foolishness.  He said, “Louis, I’ll teach this school just as I please.”

“Now I can’t read and write myself, and I wanted my little Petey to learn those things. The teacher said he was learning those things, but I didn’t believe it, with Petey bringing home those X’s and things every night. So I got Baptiste and Lazarre and Joe, and we had him turned out of the school. Well, he had to go, but when he was on his way home, he passed my house and said, “Louis, I’ll be back next year, and give you and awful beating for this!” I laughed at him, but I wish I hadn’t/

“He wasn’t very well, and the next spring I heard that he was dead, and I said to myself, ‘you needn’t worry about that beating, Louis.’

“Well, one night, that fall after he died I started down after the cows. It was just after supper, and as light as day. I went to the bars, and let them down, so I could drive the cows through. I went down in the pasture and found the cows, and started them home. Well, we got most of the way back to the bars, and I was behind the cows, thinking about nothing in particular, when those cows gave a bellow and turned and ran another way, and I looked up, and there was those bars, put back up, and on the top one sat a fellow all dressed in grey. I started to ask him what he scared my cows for, when he said, ‘Louis, I told you I would come back in a year, and here I am, and you’re going to take a beating.’ Then I saw it was that teacher who had died six months before.

“I started to run, but he caught me, and threw me down behind a stump and then he gave me the worst beating that anybody every got. I tried to fight be he was as strong as the devil, and he beat me like he would a baby. Then he let me up and told me to go, and I went a little way and picked up a rock to throw at him, but he was nowhere around. Then I thought I’d had enough of ghosts and I cut for home as fast as I could. I didn’t dare get the cows that night, but the next day I went down and milked the cows, and didn’t see the fellow in grey.

“He didn’t bother me any more until just a year from that day, when I went after the cows same as usual, and when I cam back, there he was, and he caught me, and gave me a worse beating than he did before. And every year on that same night, I don’t dare go after the cows, but after a while I go down towards the bars, and there he is, sitting on the top bar, waiting for me.”

Crabtree made it clear that he was included to believe the story. He said that he had confirmed it with Louis’ family, who confirmed that Louis had come back from the fields one night bloodied and bruised, and that some of his neighbors had even seen the grey spook waiting for Louis on the anniversary of the night in future years. Setting aside the supernatural parts of the tale, the events of the story are plausible enough. Crabtree implies that Louis and his friends chased off the school teacher because they didn’t understand what he was teaching their children, and that the ignorant farmers distrusted education (in his introduction he called the Acadians “in many respects, as simple and innocent of the ways of the world as when they first left the shores of Nova Scotia.” 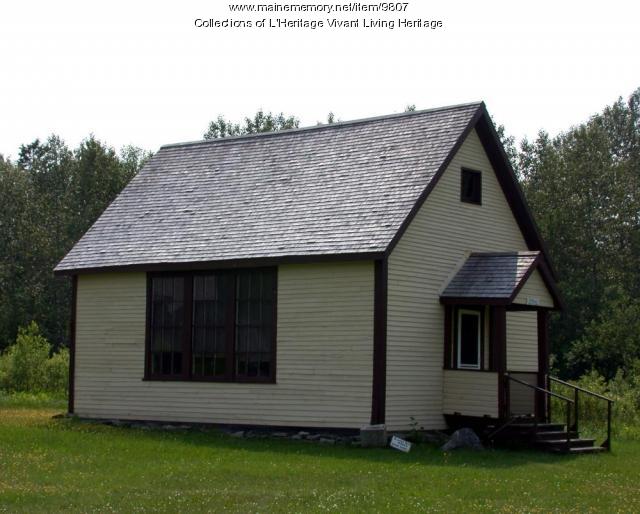 But the farmers’ anger at the school teacher may have had other roots. The state of Maine had only exercised loose control over public education in the St John Valley until 1872, when local school districts were established there. As part of the 1872 law, instruction was to be given primarily in English. The state also begun sending Yankee teachers into the St John Valley to teach in the local public schools, as well as training local residents to teach in English at the new Madawaska Normal School (now the University of Maine at Fort Kent). The state’s efforts to assimilate the Acadians made public schools a source of tension in the community.

Added to this was the reality that when children were at school, they couldn’t help with work on the farm. In 1887, Maine had passed a strict school attendance law, which established town truant officers to compel children aged 8-15 to attend schools. Families could be fined up to $25 (roughly $700 in today’s terms) for absences. Boys between 10 and 15 could be sent to the state reform school if they were “found to be wandering about the streets…during the school hours.” This law was irregularly enforced, but it sent a strong message to Mainers about the legislature’s intent. In this context, it’s more understandable why Louis and his neighbors resented the teacher.

If the ghostly school master represented the forces of assimilation arrayed against the Acadians, then his return year after year, even after death, is a fitting metaphor. Just as the ghost in the story haunted Louis relentlessly, so the specter of assimilation returned repeatedly to injure Maine’s Acadians. By 1919 the state passed a law outlawing the use of French in public schools entirely, relegating it to foreign language classes only. The intent was to impose English-only education on the St John Valley (and elsewhere) In many ways, the law, which was not repealed until 1969, had its desired effect. Today Valley schools are all Anglophone, and today children in the region are less likely than ever to speak French. But even among the generation who don’t speak the language, many still retain a strong sense of cultural identity and tradition – elements that are most often passed along in stories and folklore.